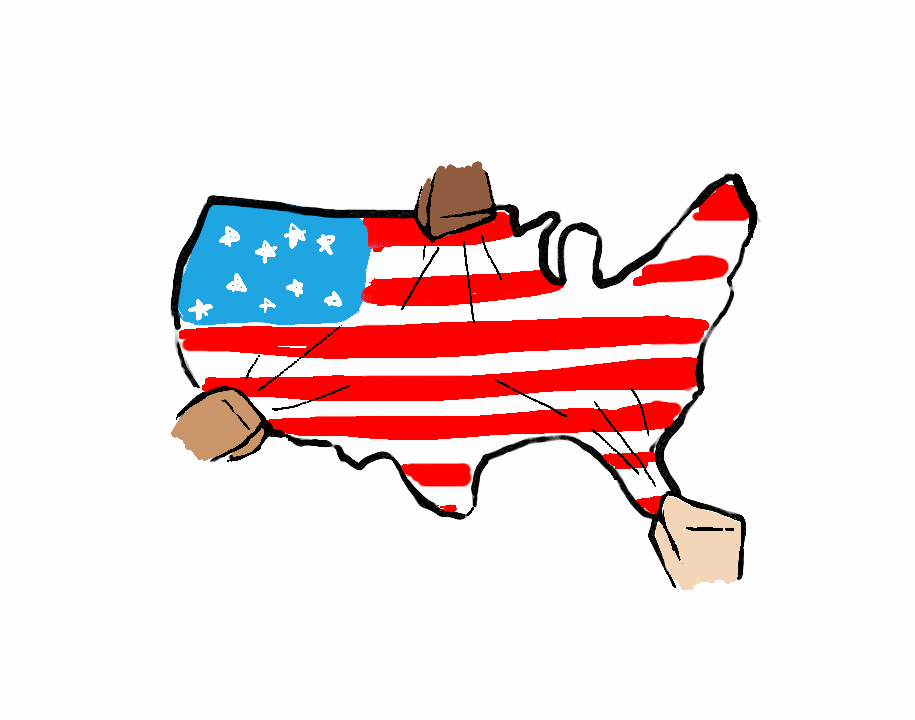 A campaign rife with the elicitation of fear and hatred has culminated in the election of Donald Trump. While these results cannot be changed, they should and they will be challenged through continuous, strategic action.

Forget the loopholes, “unknown” laws and exceptions advertised by media sources following November 9. There is no way around the fact that on November 9, 59 million people — with help from the electoral college — elected a president who has repeatedly invalidated sexual assault victims, vowed to ban all members of an entire religion from the United States, mocked a reporter with disabilities and refused to supply tax records.

Within days of election, the president-elect — a sobering appositive following a surreal campaign — contradicted a hallmark of his campaign’s values by filling his transition team to the brim with corporate lobbyists and Wall Street interests. This includes a Verizon consultant making decisions for the Federal Communication Commission, a man who stands behind the headline “The Solution to Online ‘Harassment’ Is Simple: Women Should Log Off” and has been endorsed by the KKK as a chief strategist, and a man who denies climate change to head the Environmental Protection Agency — at least until Trump gets rid of it “in almost every form.” Within days of the election, the man many voted for on the basis of electing a “political outsider” will find the new “inside” to be a clear road for corporate influence in politics.

The result of this election cannot be changed, but it can be refuted, protested and fought. For the sake of communicating that hatred and fear-mongering do not suffice as the predominant traits of a president, it must be.

Such is agreed upon by those who have taken to opposition of all kinds: school walkouts, sit-ins, silent protests and freeway marches. But those who have taken only to open letters, articles and posts must realize that in order for these strictly verbal forms of opposition to translate into action, those who who hope for change and who look to act rather than merely speak — particularly those at UCSD — must look to the groundwork that has already been laid, such as the meetings taking place weekly at Groundworks Bookstore on campus or the teach-ins given by students and faculty alike, and be a part of it.

On campus alone — even if not being reported upon — groups are organizing in a way that is extensively planned, strategic and widespread. Activism at UCSD is more than reaction protests. It involves students, graduate students, faculty and collectives. It takes place in streets, on Library Walk, outside of the Chancellor’s Complex, in front of Geisel Library, and more frequently inside of conference rooms or lecture halls. It takes the form of silence, speaking and chanting alike; of gathering, organizing and listing demands. People who spend time at UCSD, who are outraged by the character of the man set to lead the United States come Jan. 20, and who yearn to be part of change owe it to themselves to explore the landscape of action already happening at UCSD and integrate themselves into it.

On Abolishing the Electoral College

For the fifth time in United States history, on November 8, the will of the people died at the hands of the Electoral College as Hillary Clinton won the popular vote but lost the presidential election. Established in Article II of the U.S. Constitution, the Electoral College was initially created with the idea that the American people were not educated or intelligent enough to choose their own president, so they chose representatives to cast a vote on behalf of their district’s interests. Eventually, the “general ticket” plan developed in which states decided to have all their electors vote for the candidate who was most popular in the state, depriving the electors of their free will. Since its inception and to this day, the Electoral College is an undemocratic institution that undermines the values our country was founded on.

Under the Electoral College, one vote does not equal one vote. For example, based on the population divided by the number of electors, one vote in Vermont weighs about 3.4 times as much as a California vote. The Electoral College system is also unequal in that it places undue emphasis on swing states, forcing candidates to cater to their needs and not those of the nation. It is often said that every four years, a handful of states decide the fate of the nation, and to some extent that is true. States like Ohio and Virginia often make the difference in who is elected president. However, this is because many other states are so solidified as Democrat or Republican, they are no longer taken into consideration. This in and of itself is a problem with the Electoral College. It silences Republicans in states like California, and Democrats in places such as Alabama, ensuring that millions of votes nationwide are seen as irrelevant and pointless. All voices deserve to be heard, not just the ones that are regularly indecisive.

Furthermore, the cardinal principle on which Electoral College was founded — that Americans are intellectually incapable of choosing a president and vice president — is undemocratic. The argument that the public “can’t handle” self-governance has long been a hallmark of dictatorships. Additionally, the Framers dictated that should the electors believe their population was incorrect with its selections for the White House, they could simply ignore their wishes and vote for a different candidate instead. By allowing an elector to drown out the voices of the public, as rare as it is, the Founding Fathers abandoned democracy from the beginning.

The Electoral College ought to be abolished — not out of hate for Donald Trump, but because no matter who is in office, no matter which policies the legislature passes, no matter where we stand in American history, democracy must persist and under this system it does not. Do not just reject a Trump presidency. Reject the electoral college because all votes should be equal, because Americans are not too stupid to make their own decisions and because no factor in the election process should be more central than the will of all people.

On the Democratic Party

For at least the next two years, members of the Democratic Party must figure out how they will deal with Republican executive, legislative and judicial branches. After last week’s brutal defeat, it is clear that the blue party must undergo a dramatic reconfiguration — how it works and whom it serves. It must prove to its voters that it is as ready for change as President-elect Donald Trump appeared to be, and it must stay true to its name by bringing democracy back into its process. Even the most moderate of Democrats could and should get behind a deviation from the status quo in order to begin mounting the party’s comeback in two years.A key demographic in which the Democrats endured a large hit in the general election was Americans making under $50,000 a year. Hillary Clinton only garnered the support of 52 percent of low-income voters, according to Washington Post exit polls, 8 percent less than President Obama’s figure in the 2012 election. More and more low-income Americans feel that the Democratic Party no longer serves them and would rather vote for a businessman who explicitly advocates against their best interests — by lowering rather than raising minimum wage, by repealing rather than expanding the Affordable Care Act, etc. With over 46 million Americans still living in poverty and approximately 28 million possessing no health insurance, it shouldn’t be a surprise that so many low-income Americans voted for drastic change, no matter what form that change comes in. They work much longer hours to survive at a lower standard and have less access to good education for their kids, especially if they live in poorer neighborhoods.

The Democratic Party must make clear that it has the platform to support and is the party for working people. It also must elect a candidate who has both a track record of helping poor Americans first and the communication skills to express this commitment to Americans who don’t have the time to read through candidate platforms. Furthermore, the Democratic National Committee needs to allow democracy to work. As much as it criticizes the Electoral College for superseding the popular vote, which at least aims to ensure fair representation by state, it uses the similarly absurd idea of superdelegates, who are bound to represent no one but themselves. With Clinton starting out with over 500 delegates ahead of her competition, the party essentially secured its fate this election cycle — a Clinton win, then a Clinton loss — before a single vote was cast. The next chair of the DNC must ensure that the party restores its status as a neutral arbiter between candidates and the American people.

On the Need for Administrative Action

Donald Trump’s immigration proposals will come to fruition is at this point uncertain, but the possibility of such is in the minds of many throughout the University of California community who have already been the target of anti-immigrant rhetoric. Reince Priebus, being recently appointed to Trump’s cabinet as White House chief of staff, has fronted more moderate stances on immigration in a move to expand Trump’s constituency. Priebus clarified Trump’s massive deportation plans by saying criminal undocumented citizens would be a priority, but then said, “… then, only until all of that is taken care of, will we look at what we are going to do next.” This intentional vagueness has caused a swelling feeling of uncertainty among undocumented students that will pile another worry into their lives.

By merely announcing last week that the UC system would uphold the “UC’s principles against tolerance,” Janet Napolitano did little to assuage this by offering an offensively mild response. There was no mention of future plans or proposals that could directly push back against federal action, like designating the UCs as sanctuaries so that collaboration between the university and U.S. Customs and Border Protection in pursuing undocumented students might be avoided.

UCs wouldn’t be exempt from federal law in the case of adopting sanctuary status and can’t keep “federal government from enforcing immigration law.” They would, however, be within their legal right to refuse cooperation with federal immigration agencies, according to professor Kurt Organista for the Daily Cal. Organista also noted that UC campuses may not be able to provide protection to students outside of campus grounds. Napolitano’s own tenure as U.S. secretary of Homeland Security under the Obama administration, whose “administration oversaw more deportations than any other in US history,” raises concerns as to how much her personal history has affected UC administration’s inadequate efforts on serving undocumented students.

Deprived of the sanctuary status of UCSD and with Trump still intent on rescinding Obama’s Deferred Action for Childhood Arrivals — protecting some undocumented students from deportation — the status of 750,000 students is put into question. One concern is how DACA’s database would be used under the auspices of a Trump administration, as it holds all 750,000 of those identities. Ultimately, action is in the hands of the UC system. On-campus organizations like MECHA have already published lists of demands including UCSD’s existence as a sanctuary status, illustrating just how strong the support runs through the community, but not within administration.

One thought on “Following Irreversible Results with Momentous Action”