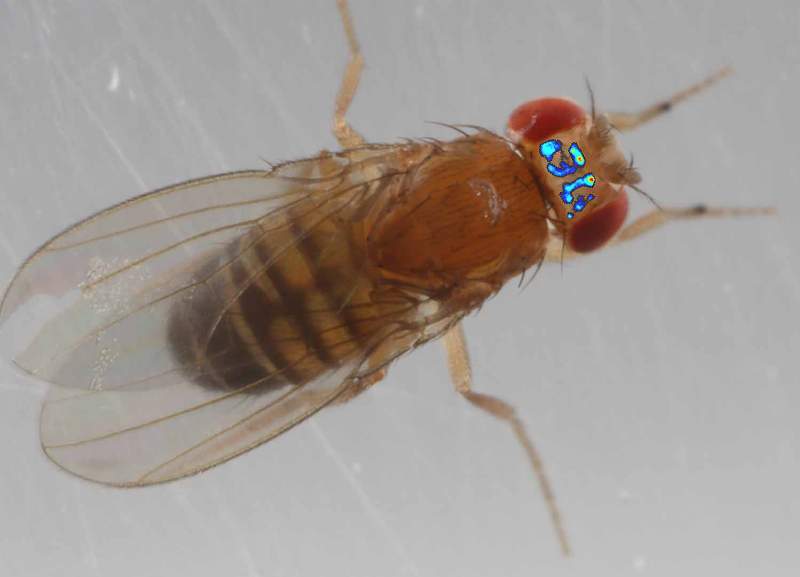 Researchers at the Kavli Institute for Brain and Mind at UCSD have developed a brain imaging technique to monitor fruit fly neural activity “untethered,” the results of which were published on May 16 by Nature Methods. “Fly Perception,” or “Flyception,” is the name of the imaging system that allows scientists to observe brain activity of flies without significantly restraining or sedating them.

The first procedure in Flyception is to replace the exoskeleton from the top of the fly head with a transparent silicone adhesive. This procedure effectively creates an imaging window with access to the upper half of the fly brain, or the protocerebrum. Co-author and Assistant Project Scientist Dhruv Grover described the region as being important to higher-cognitive functions.

“The protocerebrum is the largest structure in the fly brain, excluding the distinct optic lobes on the two sides,” Grover told the UCSD Guardian. “It includes many structures relevant for higher-cognitive functions in flies, such as learning, memory, motor control, navigation, courtship, aggression [and others]”

Co-author and Assistant Project Scientist Takeo Katsuki added that the protocerebrum was the most accessible region to test the system.

“The protocerebrum is the easiest part to look at with surgery,” Katsuki told the Guardian. “You could look at wider brain regions if you remove the cuticle from the back side of the head, but we wanted to demonstrate that the approach is feasible.”

The second procedure in Flyception involves developing a program to track the fly as it walks around the arena. The system includes rotating mirrors that keep the fly positioned at the center of two cameras while a laser beam excites fluorescent, genetically-encoded calcium indicator proteins. A third camera captures the emitted fluorescent signals and records it at 1,000 frames per second. Katsuki describes calcium to be an effective indicator of neural activity in vivo.

“Many, if not all neurons use calcium as a secondary messenger so when neurons are active, calcium ions are released in the cell and this calcium indicator reports, basically, neuronal activities,” Katuski said. “In the cases where neurons don’t show action potentials, we can directly monitor voltage change or electrical activity itself.”

“The problem of conventional imaging paradigms was that you needed to immobilize the fruit fly, which prevents them from behaving naturally,” Katsuki told the Guardian.  “We wanted to solve the problem by developing this system that allows us to image brain activity in freely walking fruit flies.”

Grover pointed out that due to their similarities, studying fly brains could reveal insights about cognitive functions in mammals, including humans.

“Even though anatomically, insect and mammalian brains are different, there are deep parallels in functioning organization,” Grover said. “The architecture and logic of how information is processed by flies, whether it’s olfactory or visual information or even higher cognitive functions, is very similar. This, in turn, gives us clues on how these similar behaviors are executed by us humans.”

Katsuki concluded that Flyception is only in its infancy and there are still issues with the system’s resolution to be addressed.

“Our ultimate goal is to look at the entire brain without restraining the fly, but for that we need additional imaging or optics system,” Katsuki said. “The feature we’d like to implement next is higher resolution, because it would allow us to distinguish neural activity from individual neurons in real time while they’re behaving naturally.”