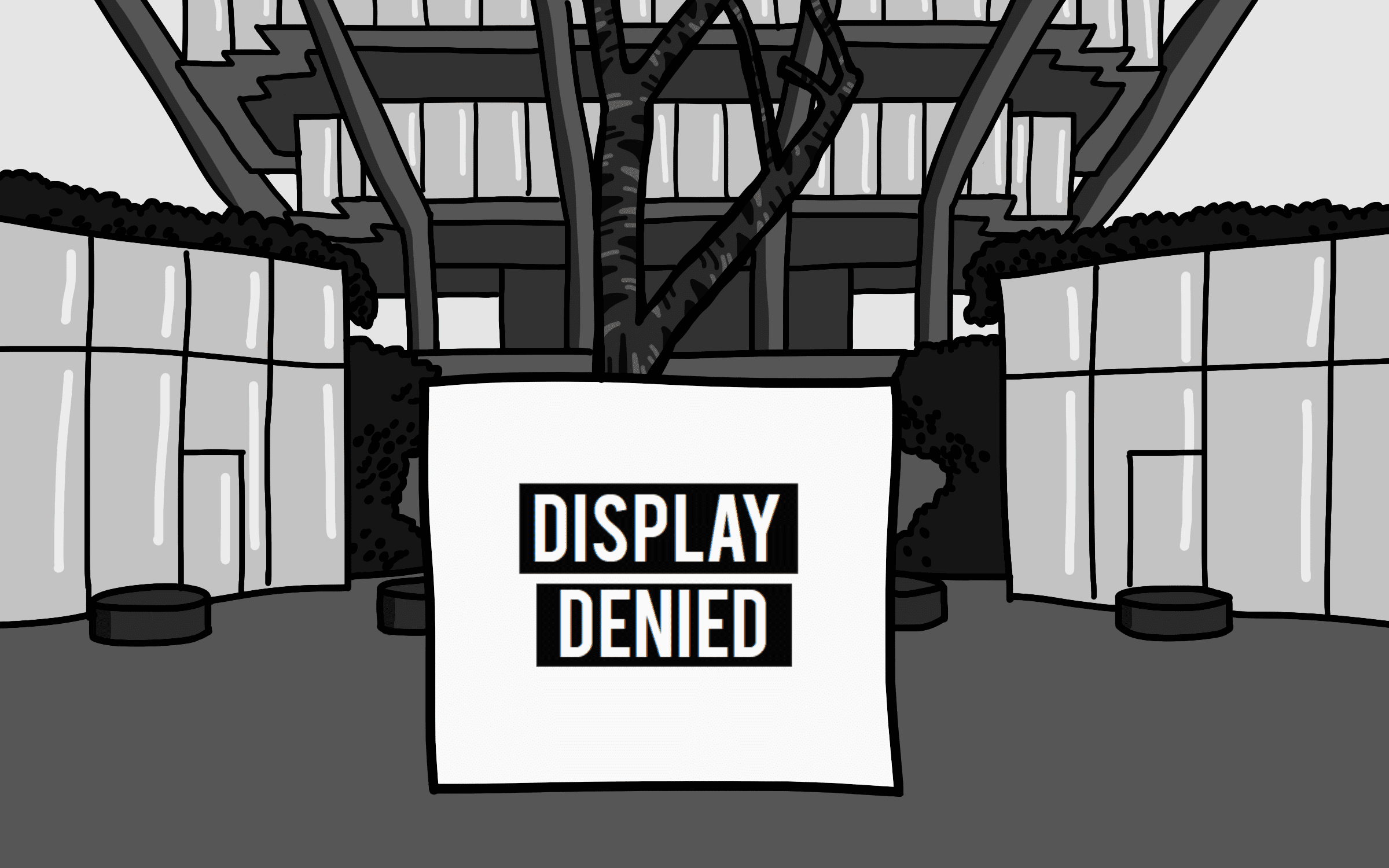 Students gathered in the area around the Silent Tree last Wednesday morning to observe an art display consisting of seven paintings on giant boards that addressed social issues such as police brutality, voting and race. Stretching over six feet tall, the boards depicted images like the Statue of Liberty, a voting box and other symbols representing aspects of American society that have recently been heavily critiqued. However, not long after they were assembled, a campus official demanded that A.S. Vice President of External Affairs Krystl Fabella, whose office provided the display, remove the display on the basis that the boards posed a threat to the safety of students due to their potential instability and that Fabella needed to reserve space for her displays. Despite the administration’s excuses for removing the exhibit, it has habitually lacked a response to other displays and demonstrations on Library Walk and at the Silent Tree in the past, when A.S. campaigns used similarly unaffixed boards. This makes it clear that the university’s decision to shut down the exhibit was completely unfounded and denied students the opportunity to understand the art and its message.

In an email to the UCSD Guardian, UCSD Communications Manager Christine Clark addressed the notion that the boards were a hazard to students by saying, “This display, which consisted of seven large boards, was not affixed to a stable support structure and [was] susceptible to being blown over.” Yet, there have been multiple instances in the past in which students and other organizations have used similar boards without interference from the administration. During this past A.S. election, both the Tritons United and Students Determined slates had multiple wooden boards standing in the area around the Silent Tree, propped up by either plastic pipe or small pieces of wood attached to the base. According to A.S. Elections Manager Claire Maniti, these boards, about six or seven feet in height, advertising for slates and campaigns, have actually fallen over “onto Library Walk and onto the area by the Silent Tree, nearly crushing passers-by.” Even more recently, a group of Christian evangelists took up the area near the start of Library Walk wielding signs nearly ten feet tall that stated “HOMO SEX IS A SIN” and other religious claims that, when leaned against benches or trees, had no support mechanism.

Had the size and structure of Fabella’s boards been a true concern of the administration’s, surely some existing policy would be in place dictating the dimensions and support of displays along Library Walk and the area surrounding the Silent Tree. Given that there has been no recent precedent for the administration to remove tall, free-standing displays, the concerns expressed that supposedly prompted the removal of Fabella’s display seem insincere and likely a poor excuse to justify shutting down an act of student expression.

Clark also explained that “had the display been reserved through the proper channels, then measures could have been taken in advance to ensure they were safely installed,” suggesting that the administration also took issue with the fact that Fabella did not reserve the space around the Silent Tree. However, the area around the Silent Tree has historically been a free-speech zone in which students are not required to request space for their events or booths like they are for Library Walk. When the Guardian spoke with Brother Aden, one of the evangelists preaching in roughly the same place as where Fabella’s displays were, Brother Aden noted that he had in no way informed the university of his group’s presence but faced no reprisal from the administration. Furthermore, throughout the school year, the area around the Silent Tree has been a place for students to freely protest, such as the #ChalkBack event responding to pro-Trump and anti-immigration chalkings, campaign and hold vigils. That Fabella would be required to ask for permission in order to use an area that Clark herself described as “not a reservable space” makes little sense.

This contradiction, combined with the administration’s inaction against similarly “unsafe” displays in the past, leads us to question why the university chose to single out this specific one. The fact that the university’s record runs contradictory to the excuses it gave Fabella causes us to wonder if the true motivation behind the administration’s orders had nothing to do with logistics but instead had to do with the images themselves, which, according to Fabella, were explicitly called “abrasive” and “offensive.” If so, if the university did indeed censor its students, then it is not the guardian of free speech it implies it is.