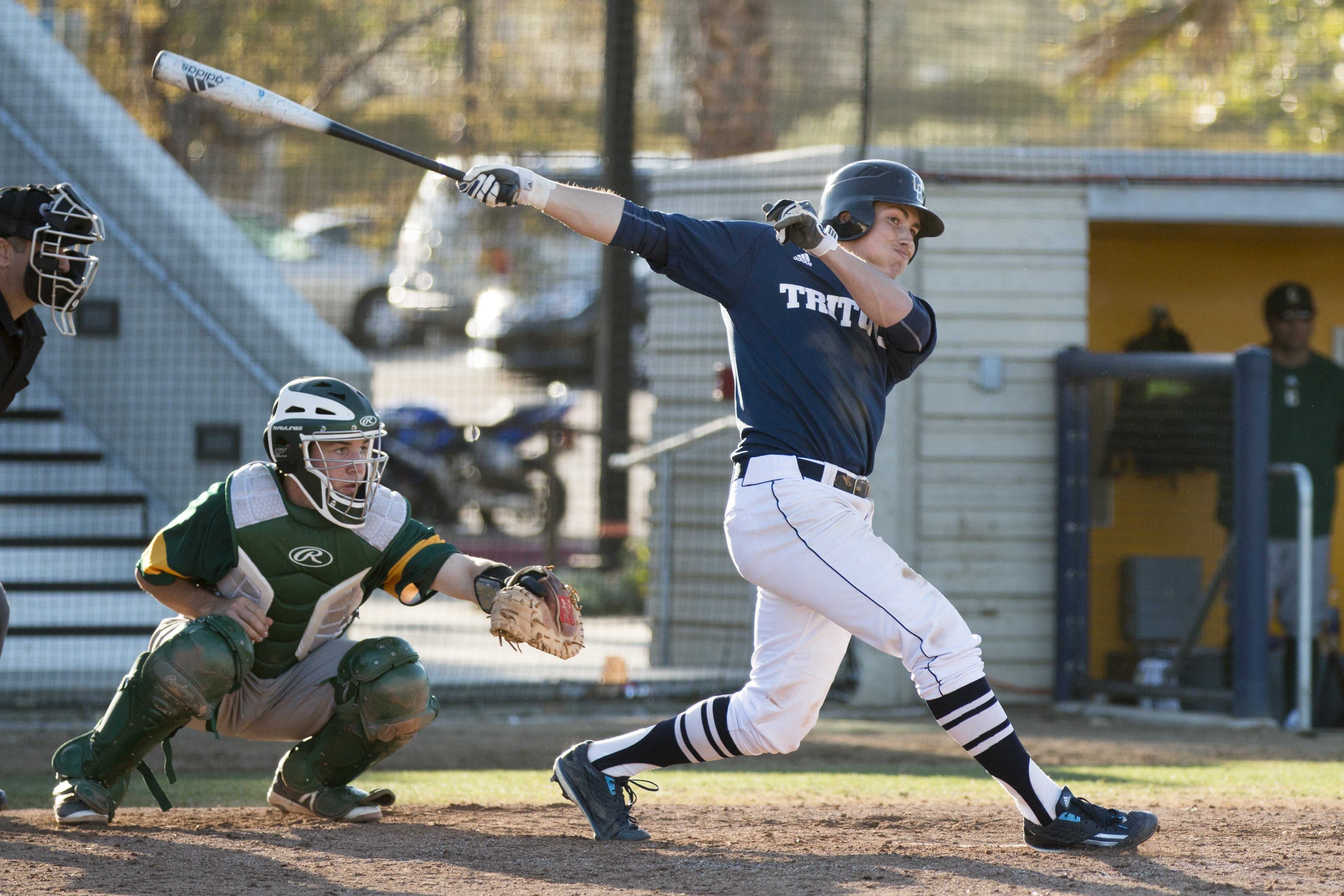 Facing their final matchup of the season, the UCSD baseball team hoped to cap their roller coaster ride of a season at a high point. Interestingly enough, the team’s final games against conference foe Cal State San Marcos mirrors their season itself: a series full of unbelievable highs and some drastic lows.

Much like the start of the season, the Tritons came out swinging with unbreakable confidence. Catching fire immediately, the Triton hitters had no trouble getting on base in the top of the first inning. With the bases loaded, a well-placed hit by junior infielder JD Hearn gave redshirt sophomore infielder Tim White a clear path to home, a precedence to a barrage of scoring that would cap out at four runs. Even though the Tritons stranded three players on base at the end of the inning, a 4–0 lead proved to be satisfactory for the Tritons.

Of course, a lead doesn’t matter if no one does anything to defend it. Freshman pitcher Kyle Mora manned the fort, holding a hot hand for the five innings he pitched. He allowed only a single hit during his period of play so that the Cougars had a hard time making any amount of offense themselves.

Unwilling to take their foot off the gas, the Tritons continued to pile on the pressure for the rest of the game, scoring two in the third, one in the seventh and another four runs in the top of the ninth.

Despite being down 11–0 in the final inning of the game, the Cougars still had an inning to play, and wound up earning some of their pride back due to a two-run homer by Cal State San Marcos senior first baseman Brandon Bentson. Unfortunately for them, the Cougars were not granted a miracle by the baseball gods, as the Tritons cruised to an 11–2 victory.

Mora was credited with the win after squaring off against 23 batters and refusing to give up a single run. Given the nature of the blowout, it makes sense that a large chunk of the team had their time to shine. White was phenomenal at bat, earning three hits, two RBIs and a run on the day. Hearn and junior outfielder Christian Leung both finished with two hits, one RBI and two runs, and junior infielder Tyler Howsley picked up two hits, two RBIs and one run.

But even after it looked like the Tritons had the Cougars’ number, Cal State San Marcos wound up flipping the table on UCSD. From the start of the Tritons’ senior day doubleheader, all of UCSD’s offensive poise from the previous game appeared to have vanished. The outs piled up for the Tritons as the Cougars’ defense made few mistakes, blanking the Tritons for the entire game.

Meanwhile, appearing to have learned from their game-one beatdown, the Cougars managed to load the bases in the top of the second inning and proceeded to score three consecutive runs thanks to a walk, a fielder’s choice and a fielding error. Even though the Cougars would only score one more run for the remainder of the game, the early deficit was just too much for the Tritons to overcome.

Despite pitching seven mostly scoreless innings, freshman pitcher Preston Mott allowed Cal State San Marcos to pull ahead early, giving up the three runs in the second inning. Even though Hearn pulled off two hits for the game, he was unable to spark any momentum for the team as they were shut out 4–0.

Clearly displeased with their previous performance, the Tritons once again stepped it up and showed off the aggression and poise that made them a contender early in the season — even if it was only for a game.

After a scoreless first inning, the Triton offense kicked into gear. With two players on base, senior first baseman Zach Friedman smashed the ball into right field which gave Leung and junior infielder Vince Mori an opportunity to dash home. This resulted in giving the Tritons a 2–0 lead. The Tritons would go on to score another run in the following inning, but the fourth inning was where the magic struck for UCSD. Thanks to some critical errors by the Cougars’ defense, Howsley, Hearn and Shirley all ended up with opportunities to add to the score count, once again giving the Tritons a commanding lead over the Cougars.

Just like in their first face-off, the Cougars attempted to save face by scoring some late-game runs, including a home run through right field, but were once again not granted any miracles. The Tritons came out on top with a commanding 7–2 victory.

Redshirt senior pitcher Alon Leichman pitched all seven innings to earn the win. Although he allowed five hits, two runs and picked up two errors, he did more than enough on defense, giving the Tritons the opportunity to bounce back. Hearn once again was fantastic at bat, getting two hits, two runs and an RBI, while Howsley also had two hits on the day.

Unfortunately for UCSD, Cal State San Marcos would walk away with the last laugh.

In spite of the fact that the Tritons were not able to manage a single hit in the first two innings, the team regained its composure in the top of the third inning, at least momentarily. With the bases loaded, senior outfielder Gradeigh Sanchez bashed a ball to the right, sending in Howsley and sophomore infielder Tyler Plantier to score, putting the Tritons up 2–1 early in the game.

This would prove to be the offense’s last hurrah, however, as the Tritons failed to capitalize on their early lead. Feeding on their opponent’s floundering offense, the Cougars immediately regained the lead with a two-run third inning, and then built upon that lead with a lone run in the sixth. The knockout punch would not arrive until the penultimate inning of the game: In the bottom of the eighth, the Cougars did as they pleased against the tired Triton defense, eventually doubling the Cougars’ score for the game. When the game finally wrapped up, the Tritons fell 8–2 to their conference rivals.

Sophomore pitcher Jack Rupe Jr. was credited with the loss, allowing six hits, three runs and obtaining three errors. Howsley managed three hits and a run. While Sanchez had his two hits and two RBIs, that was not enough to top the vengeful Cougars.