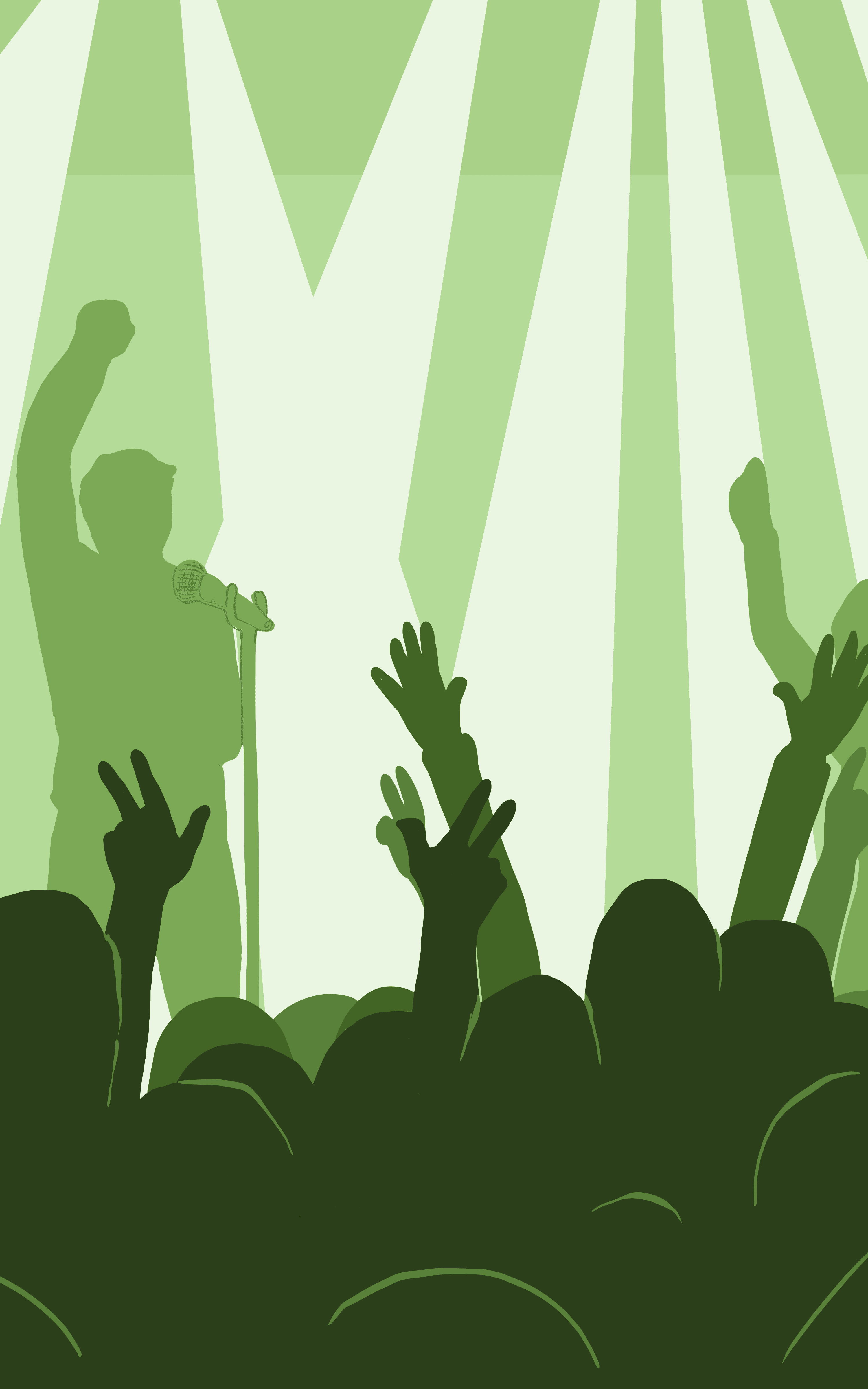 by Harrison Lee and Matthew Zamudio

We found our place in line just as the girl in front of us lost hers. She was being arrested by two police officers who escorted her away. We shuffled forward to fill the empty space.

Uniformed officials stood on all sides, some with drug-sniffing German shepherds, others beside their squad cars. This was the threshold. If we could make it through the line and to the entrance of Sun God without being picked off by the authorities, our first battle would be won. We did. And the pat-down went smoothly.

The field was peppered with people. We walked toward the main stage first, where a crowd was beginning to form. They were listening to Paradise, a student artist and the winner of UCSD’s annual Battle of the Bands. Her style was acoustic, gentle and seemingly influenced by the mellow music of artists like Jason Mraz and Maroon 5 before they turned into pop acts. We easily pushed our way to the front.

Devoted fans watched Paradise Khatibi with intent stares, but the rest of the crowd was freshly intoxicated and distracted — you could tell by their long sentences and wobbly body language. There was noticeable anticipation in the air as we waited for the secret artist, Louis the Child, to come on stage. The DJ duo, made up of Freddy Kennett and Robby Hauldren, was announced days before the event because of their contract with Coachella Music Festival. We had never heard of the act, but we were anomalies. Almost everyone around us had come specifically for them, and planned to leave as soon as they finished.

We moved through the crowd and to the outskirts of the audience. Small groups of students were sitting in circles on the grass; some were lying down. On the side of the field where the mainstage stood, there was life. But on the opposite side, where in past years there had been a second stage, the landscape was desolate except for long lines of porta-potties. We spotted a tall student who had just finished his business. He told us to call him Allen, Allen Thompson. We asked him who he was most excited to see.

“I don’t know any of the artists, so there’s that,” he said. Naturally, we followed up with the question of why he came.

“I’m here for the funnel cake.”

Afterward, Great Good Fine Ok and Nico & Vinz performed. During that time, we stumbled upon the Chill Island tent, a stageless venue organized by UCSD’s KSDT radio station. Steven Lee, from the DJ and vinylphiles club, DVC, was playing a set, and the crowd couldn’t get enough. The Chill Island tent also offered arcade games and arts and crafts. We noticed that a girl running around the tent wearing a KSDT t-shirt was tending to the students. Her name was Camellia Lee, and she was one of the organizers. We asked her why she thought her tent was more, as they say, “lit” than the mainstage.

“We didn’t anticipate this, but it’s a happy accident,” she said. “We partnered up with ASCE to put up this tent. I think they did a good job with the limitations they had.”

It was around five o’clock when some of the water tanks ran dry, leaving the Rockstar pop-up in the center of the field as the only source of liquid. Earlier in the afternoon the Rockstar promoters seemed worried that they wouldn’t able to get rid of the hundreds of caffeine-loaded drinks they’d brought with them, and started giving them away like candy. Students flocked to the Rockstar tent as their drunk started to fade. They were handed two cans at a time.

We began wondering if there would be an entirely separate detox area for fading drunks, tweaked out on caffeine, sugar and whatever other research chemicals are in Rockstar. At one point we thought we might have heard far-off cries of “Just two more cans! Please!” Fatigue was setting in, so we decided we’d better have an energy drink too. We were handed two drinks and the promoter picked up two more, passing them in our direction. “We’re OK,” we told him. He glanced at us with a look that said “You sure about that?” We shot back with a look that said, “yes.”

The outskirts of the field were riddled with security. “This could be our way into the drunk tank,” we thought. We slowly made our way across the field to the gate on the side of the field and eventually asked one of the officers standing outside the gate if he would be interested in talking with us. He looked to his right, scanning the line of guards for anyone else to refer us to.

“You’re gonna want to talk to…”

He pointed to another guard standing further down who then called his supervisor. His supervisor approached us slowly, looking confident and full of answers.

“Would it be alright if we talked to you a little for the paper?” He looked at both of us for a moment, analyzing the situation before saying “no” and walking back to his post. You could feel the tension as we walked past the security officers. The heightened security presence was obviously a reaction to the past incidents of students with alcohol poisoning and drug overdoses. Whether it was the cops, the early time of the concert or the lineup, students had been visibly calm and mellow for the duration of the day. But all of that was about to change.

We were somewhere by the food trucks when we heard,

We turned around and realized that Miguel was on stage wearing a poncho. His attempts to insert some much needed energy into the crowd were admirable. It was apparent that Miguel was aware of the irritation over the lack of EDM in the lineup. During his set he began speaking to the crowd, “Let’s give it up for my band! Real musicians playing real music!” It was a bold statement, but commendable.

By “real,” Miguel implied that music created on instruments is somehow more genuine than music created with turntables. His slow, soulful beats and wailing vocals, full of “Ooo”s, “Yeah”s and “Baby”s, are supported by rhythm guitarists and a drummer, but the synthesizer is ever-present in Miguel’s music, raising the question of where the line between real and “fake” music is drawn. In any case, Miguel’s performance was what we expected it would be: anticlimactic.

“Please, our friend is in there, we need to pick him up.” We made one last attempt to see the inside of the drunk tank, but none of the officers would oblige our request. We decided to cut our losses and leave as the festival was winding down. “We’ll find it next year,” we told ourselves.

Most students were heading toward the exit or splayed out on the grass, half passed out and half drunk. Benedict Paz, who wore a flower in his hair, was one of the students lying on the grass. He was coherent, but fatigued. We asked him why he decided to come to the event. Was it the music? Tradition? A mere excuse to get hammered?

“There is a simple reason why I came to Sun God: we had to pay for it,” he said. “Might as well get our money’s worth and show up.”

One thought on “Searching for the Drunk Tank”