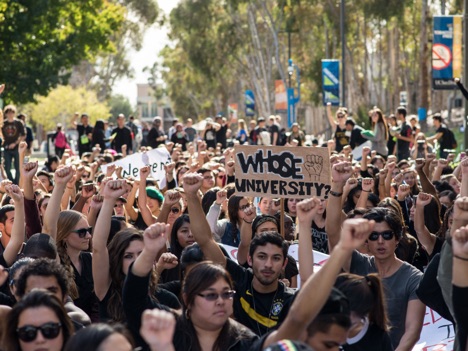 On Thursday, Feb. 4, a group of Armenian students staged a sit-in protest in front of the Silent Tree, where they wore red tape across their mouths that read “Denial,” referring to the United States’ negligent attitude toward the Armenian genocide of 1915. The students, who have voiced their opinions on the matter in the past, decided that silence was perhaps louder than sound in their case. They figured that if the dead can’t speak, they shouldn’t either. A few days later, articles began popping up on the Internet and in print detailing the focus of their protest. Awareness grew like a slow-burning wildfire. Their message had not only been heard, it had been shared.

Like many protesters before them, these students used their First Amendment rights to make a public stand for something they strongly support and believe in. After identifying the problem, they organized their assets and formed a plan that would define the way in which they’d go about broadcasting their cause. In this case, their efforts were successful, adding their protest at the Silent Tree to a long list of highly effective protests performed on our campus since its establishment in 1960. Our track record of social movements includes such memorable protests like the recent protesting of the anti-abortion signs, the Black Student Union’s occupation of Library Walk and George Winne Jr.’s suicidal demonstration against U.S. involvement in the Vietnam War, in which he set himself ablaze in an act of self-immolation at Revelle Plaza. At UCSD, we seem to be well-versed in the art of protest.

But how, exactly, do you make sure that your protest will succeed in achieving its ultimate goal? How does one stage an effective protest? While it often seems that protests end in blurry resolutions, there is always a winner and a loser when all’s said and done. Stephen Meyers, professor of sociology at University of Washington, Seattle, has made a living of trying to understand the art of protesting. He believes it is imperative that individuals and organizations be prepared for their anarchic moment in the limelight.

“Protests are most effective when all of the players are on the same page and stick to a single message,” Meyers told the UCSD Guardian. “This fact, however, means that diversity is sacrificed for unity. Participants may have very different reasons for protesting, but their specific issues and interests are ignored.”

As the breadth of an issue widens, the amount of neglected sub-issues increases commensurately. The hope is that, in making these bittersweet sacrifices, the prevalent issue will muster enough recognition to address those that have taken a proverbial backseat. By taking these details into account, the organizers of protests can design a social movement that has the greatest potential to invoke change.

The Million Student March, which took place last November on campus, is an example of a protest which struggled to unite under one single and compelling cause. With a protester turnout best described as “dismal,” the march consisted of about 100 students carrying homemade signs and chanting inaudibly. The issues at hand were said to be tuition, student debt and minimum wage, but students also  advocated for the Black Lives Matter movement and for Bernie Sanders’ campaign.

Ineffective protesting is the natural result of disorganization and a lack of consensus, but as Ivan Evans, professor of sociology and Provost of Eleanor Roosevelt College, put it, “protest[s] that appear to fall short of [their] mark in the short term may still contribute to a ‘culture of protest’ that might later succeed in advancing the aims of protesters … Still, protest is least effective when protesters misread their audiences or the strategic spaces they operate in.”

Ending apartheid in South Africa, Evans noted, is one historical instance when the protesting body got it wrong. The marginalized Africans of the country employed Mahatma Gandhi’s strategy of passive resistance and Martin Luther King Jr.’s strategy of nonviolent civil disobedience, which became famous during the civil rights movement.

“When the Apartheid state responded with bullets and massacres,” said Evans, “blacks abandoned these tactics, went underground and adopted the language of ‘armed struggle.’”

From ineffective protests, sociologists like Evans and Meyers can gather valuable information on what works and what doesn’t. Experienced protesting bodies also make sure to pay close attention to the protesting climate around them, so that they may draw on techniques that could potentially aid them in their own demonstration. Over time, a sort of registry of effective and ineffective protesting tactics is accumulated, though each must be refined and tweaked to address the unique issue at hand. Still, there exist a few protesting mainstays.

March 2015 saw the beginning of yet another protest on campus: supporters of the Che Cafe demonstrated outside of the Cafe after receiving an eviction notice from the administration. Since 1980, the university has been trying to remove the Che Cafe, a community center, cafe and music venue, from its place in the densely wooded outskirts of Revelle College. This time, like many times before, members of the Che Cafe Collective refused to leave their beloved base and banded together in a movement to “Save The C.H.E.!” Their tactic was simple: to occupy the edifice until the administration took notice of their opposition. Lane Barlow, an insider at the Che Cafe, told the Guardian about their stakeout.

“The occupation was about more than just refusing to leave,” said Barlow. “Through continued programming and media exposure, the collective maintained and increased its visibility. During this time, we made fairly regular press releases and tabled on Library Walk as often as we could. We touched up some of our murals with their original creator, Mario Torero, and we took many other measures to remind people that we were still here and still fighting.”

In the end their efforts paid off, and Chancellor Khosla agreed to negotiate with the Collective over terms for a new master-space agreement. Currently, the Collective is working in unison with the Food Co-op, G-store and Groundwork Books to win terms which will preserve campus co-ops like the Che Cafe for generations of students to come. In the meantime the Che Cafe continues to facilitate weekly movie nights, yoga and concerts.

“The occupation of the Che [Cafe] was successful because it was both persistent and obstructive,” explained Barlow. “The administration was waiting for the occupation and other modes of protest to peter out, and our efforts would have accomplished nothing if we [had] let that happen”

It’s clear that if protest is conducted intelligently and persistently, positive results will follow. Even when a given protest does not succeed in achieving its goal, it still serves to open the door for future protests which are more likely to emerge victorious. Still, the question of why this is true looms over both the protester and he who is protested against. There’s something special about protesting in the sense that it’s able to produce results only after every other option has been expended. Evans told the Guardian why he believes the social phenomenon is so powerful.

“Protest is effective because it rocks the boat,” Evans said. “Protest makes visible those voices that are usually ignored or dismissed. It projects those voices into the public sphere and compels dominant authorities to listen up and respond. Protest therefore transforms private grievances into disruptive public spectacles that cannot be ignored.”

It isn’t human nature to protest. It is human nature to acquiesce. During our lifetimes we are constantly giving up power and consent with the understanding that we will be respected and taken care of in turn. But this consent is conditional. When we either calculate that our submission to authority is no longer worthwhile, or that the ruling groups seem to have lost their moral compass, subordinate groups withdraw their consent. The result is protest, insurrection and rebellion, according to Evans.

Say we attain utopia, though. At that point in time, we can assume that people will no longer have reason or time to protest.

The question then becomes: Will people ever stop protesting? Meyer’s response seems to sum it up nicely.