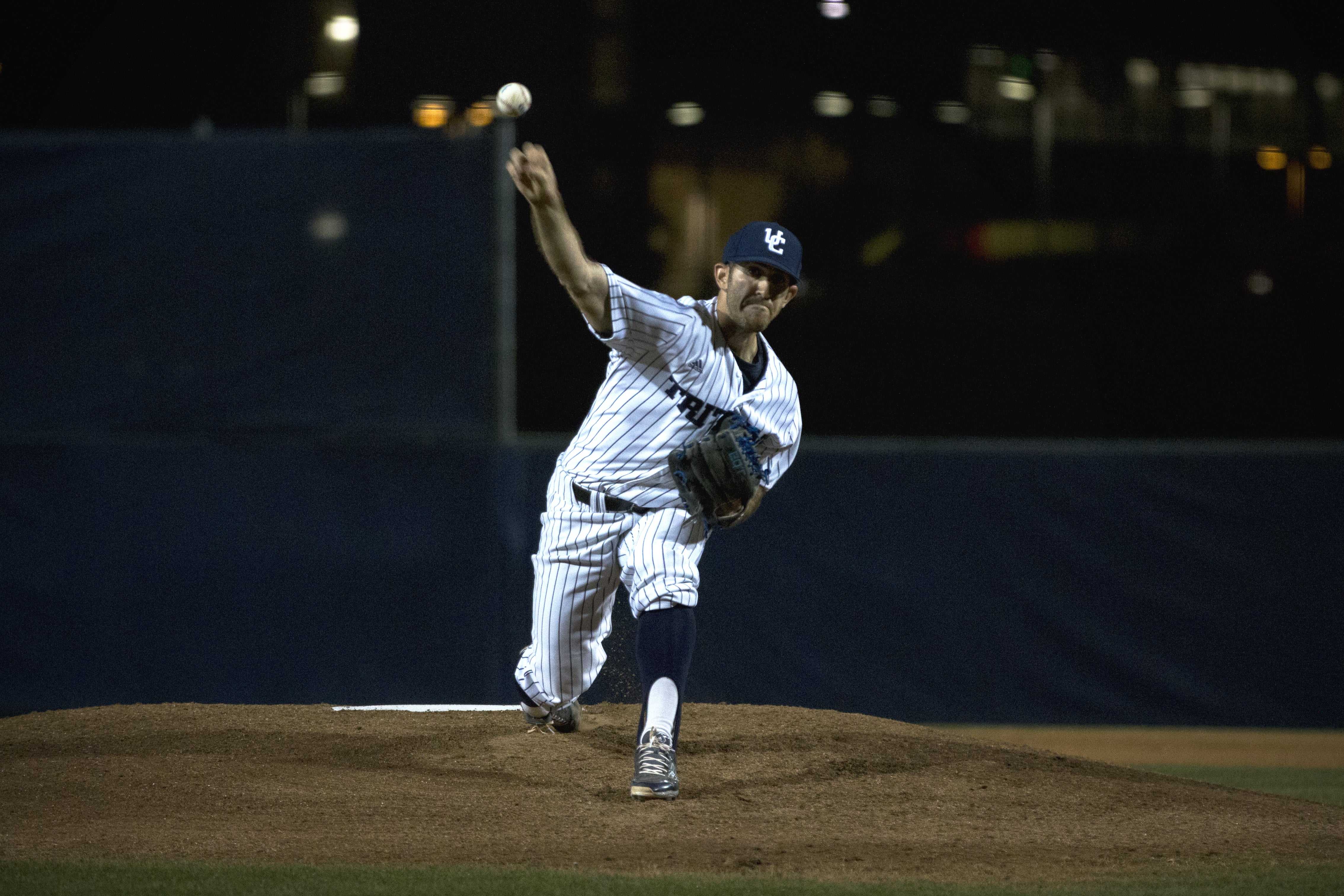 The Tritons overcame their four-game losing streak this past weekend as they took two of three games against California Collegiate Athletic Association opponent Cal State Stanislaus. The Tritons were previously nationally ranked in the Collegiate Baseball Newspaper poll for the entire season, but after getting swept by Chico State last weekend, they were dropped from the rankings. Their playoff hopes are still alive, however, as they are holding onto the No. 2 spot in the CCAA Southern Division rankings behind Cal Poly Pomona with a 22–12 overall record and a 12–10 record in the CCAA after winning their series against Cal State Stanislaus.

Head Coach Eric Newman, gave freshman left-handed pitcher Preston Mott the ball to start the Saturday night doubleheader against Cal State Stanislaus which, in turn, gave up four earned runs on five hits to the Warriors during the five innings pitched. Meanwhile, freshman right-handed pitcher Tim Nelson managed to pick up his fourth win of the season as he came in for relief at the top of the eighth inning and shut out the Warriors for six outs.

The Warriors took the lead early as they scored the first run of the game off of a throwing error by the Tritons’ third baseman. They continued to put three more runs on the board during the second inning, giving the Warriors a 4–0 advantage before the Tritons responded. Sophomore infielder Tyler Plantier started the Tritons’ rally in the bottom of the second inning by getting plunked by a pitch. The Tritons quickly loaded the bases and with nobody out, freshman catcher Michael Palos walked on a 3–2 count, narrowing the Warriors’ lead to 4–1. After the Warriors got one out, junior outfielder Brandon Shirley hit a base hit through the left side, scoring the second run of the inning. Senior outfielder Gradeigh Sanchez followed with an RBI fielder’s choice to the Warriors’ first baseman, cutting the deficit to one run.

The Tritons finally tied the score up, 5–5, in the bottom of the fourth after a two-run triple by Shirley. The Warriors’ offense exploded in the sixth inning as they scored four runs but the Tritons quickly matched them with four runs of their own.

With the score tied up, 9–9, Stanislaus scored one run to take the lead in the top of the eighth inning. Then Plantier hit a towering solo home run to left field, tying the game back up, 10–10. Nelson came in and shut out the Warriors for the remainder of the game. With the bases loaded, in the bottom of the 10th inning, the Tritons’ sophomore catcher, Steven Coe, hit a walk-off base hit down the right field line scoring Plantier from third for the win.

The Tritons swept Cal State Stanislaus for the series win on Saturday as they won game one in walk-off fashion and crushed the Warriors 10–2 in game two. The Tritons batted around their entire lineup in the first inning as they collected seven runs on four hits, four walks and two fielding errors by the Warriors. Furthermore, Plantier manufactured a run for his team as he walked to lead off the bottom of the second inning, stole second and third base, then scored on a sacrifice fly by junior outfielder Christian Leung. The Tritons remained in control of the ball game as they didn’t allow the Warriors to put a run on the board until the last inning, when they scored two runs off of freshman right-handed pitcher Zach Wallace. The Tritons’ freshman starting right-handed pitcher, Kyle Mora, picked up his third win of the season, shutting the Warriors out and allowing them just two hits through six innings pitched. Sanchez and freshman first baseman Tyler Durna each recorded two hits apiece while Plantier had a hit and two RBIs in game two.

“The resiliency and competitiveness was tremendous,” UCSD Head Coach Eric Newman told UCSD Athletics. “To come back the way we did … and continue to keep the pressure on [Cal State Stanislaus], that was a big moment for this team and [its] growth.”

The Warriors scored two runs early off of the Tritons’ sophomore right-handed starting pitcher, Jack Rupe, in the top of the first inning. However, during the top of the third, the Tritons couldn’t get out of the inning as the Warriors scored six more runs on five hits. The Warriors proceeded to score two more runs before the Tritons responded with some runs of their own. After back-to-back singles by Plantier and junior infielder Vince Mori, sophomore outfielder Justin Flatt walked to load the bases for Coe. Coe hit a sacrifice fly to score Plantier and junior infielder Tyler Howsley also got an RBI as his groundball allowed Mori to score from third. Shirley followed with an RBI-double down the right field line, making the score 10–3 in the Warriors favor. UCSD rallied in the bottom of the seventh: Junior infielder JD Hearn, Shirley and Mori all had base hits putting three more runs on the board for the Tritons. Although the Tritons continued to score in the eighth and ninth inning, it wasn’t enough to earn the sweep against Cal State Stanislaus. The Tritons dropped game three to the Warriors 11–8 as Rupe picked up his third loss of the season.

UCSD has another three-game series with Sonoma State from the North Division this weekend, starting Saturday at 11 a.m.