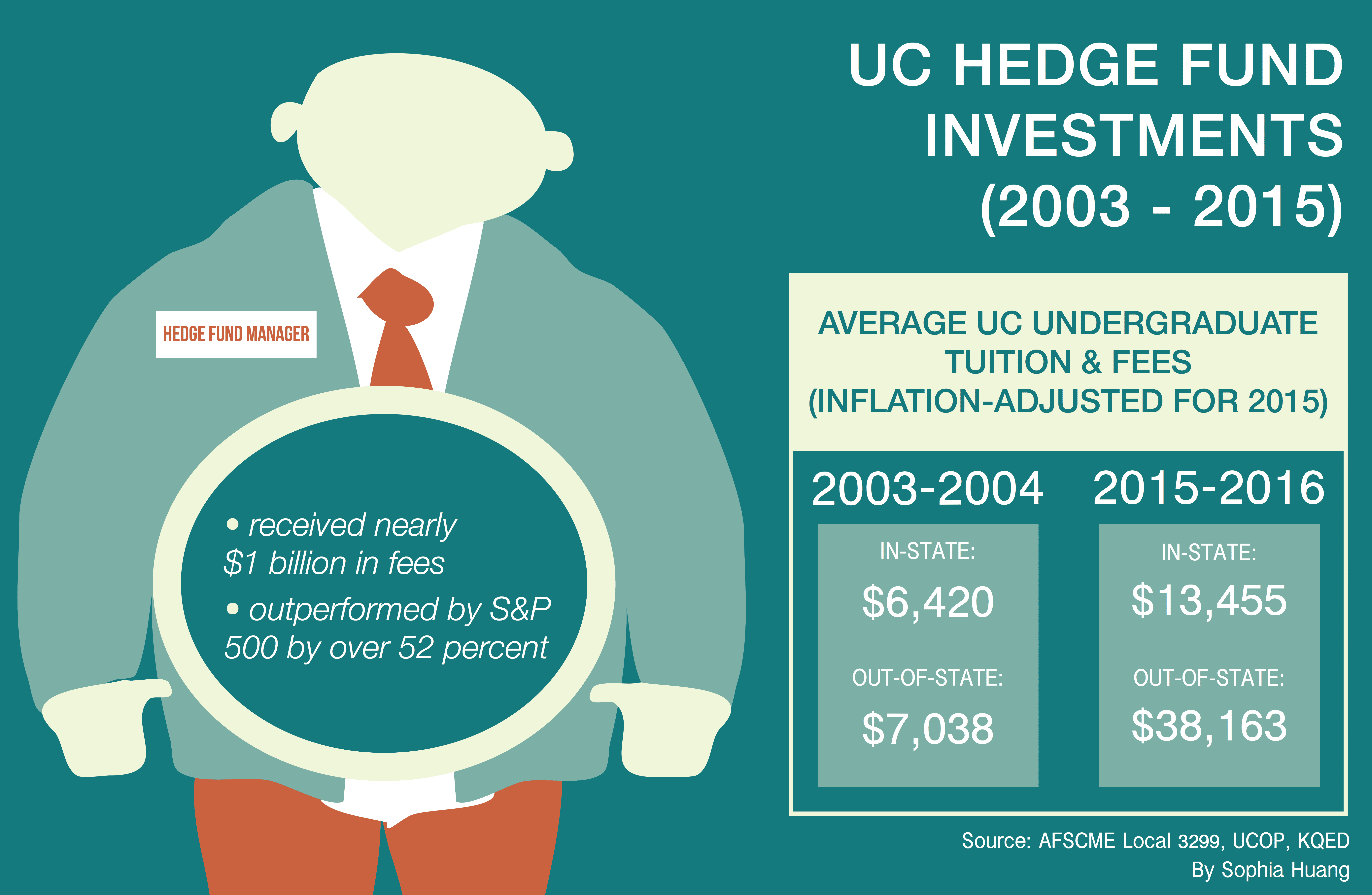 The University of California’s largest labor union American Federation of State, County and Municipal Employees Local 3299 released a study in which it found that the university paid over $1 billion in fees to hedge fund managers over the last 12 years.

In the research paper, titled “Missing the Mark: How Hedge Fund Investments at University of California Shortchange Students, Staff and California Taxpayers,” AFSCME Local 3299 reports that the S&P 500 Index outperformed the university’s hedge fund investments by over 52 percent. Furthermore, the university could have earned approximately $783 million more by investing its hedge fund assets in its UC Retirement Plan and General Endowment Pool portfolios instead.

AFSCME Local 3299 spokesman Todd Stenhouse argued to the UCSD Guardian that his organization’s research questions the validity of every call for financial austerity the university has made over the last 12 years, many of which came at the expense of UC students and workers.

“Between 2003 and 2015, your tuition tripled, student services were dramatically cut, staff was cut and employees took huge cuts to their retirement,” Stenhouse said. “All that time, we were told by the university, ‘It’s the problem of state divestment, it’s the problem of the recession, our students pay below-market in-state tuition rates.’ Well, this study essentially calls that all into question.”

Furthermore, A.S. President Dominick Suvonnasupa disagreed with investing in hedge funds when the university already has employees who were hired to manage its investments.

“It doesn’t make sense to me that we’re paying people to overlook [the university’s finances] and also paying a hedge fund on the side, especially if the returns are lagging behind regular indexes,” Suvonnasupa told the Guardian.

Though the study’s findings exhibit a trend in UC hedge fund investments, UC Office of the President media specialist Kate Moser called into question the relevance of the information the study is based on, considering that the university is currently looking to shift its investment focus away from hedge funds.

“The data used [in the study] predates the tenure of Chief Investment Officer Jagdeep Singh Bachher,” Moser said. “Reducing the number of outside hedge fund managers has been a key priority of the CIO’s office under Bachher.”

On the other hand, Stenhouse thinks the university’s newfound priorities speak to the legitimacy of their findings. Pointing out that the university paid $96 million to hedge fund managers just last year, he argues that the financiers of the university must demand financial transparency from the administration.

“What [UCOP] has alleged or asserted really validates the study as a whole,” Stenhouse said. “A strategy was employed that did not deliver as promised and cost the UC system mightily, which by extension cost its students, its staff and California taxpayers mightily. We would all be well-advised not to forget but to double down on real scrutiny and real accountability to make sure this type of thing never happens again.”

To further this point, he emphasized that the union is not making any financial recommendations to the university. By requesting that the UC Board of Regents disclose all hedge fund fees and conduct an asset allocation review to identify alternative investment strategies, it instead appeals to the university to communicate honestly with its constituents.

“Notably, this paper does not call for divestment,” Stenhouse said. “What it calls for is transparency, inclusion, real dialogue and a little bit of candor from those at the Regents level who have led the call for austerity while, at the same time, turning a blind eye to investments that not only failed to deliver as promised, but may have ended up costing the university hundreds upon hundreds of millions of dollars unnecessarily.”

Stenhouse expressed his hope that this paper encourages not only a discussion about hedge fund investments but also regarding all aspects of the university’s decisions.

The Guardian contacted Singh but he could not be reached by press time.