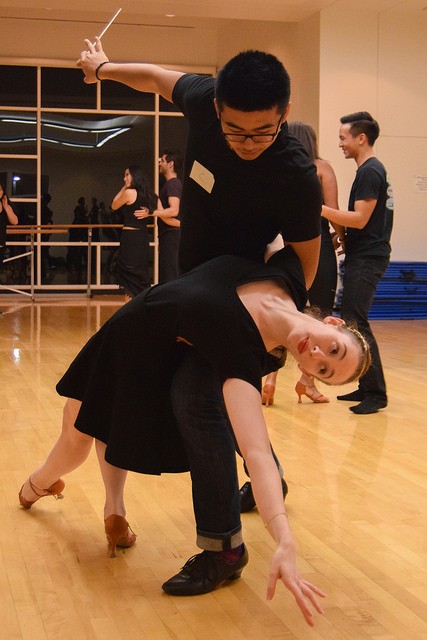 The dance begins with a primal scream from the men, who are separate from the women. After the women dance around the men in what Paula Anzenberg, the UCSD Dancesport captain, calls a “mating ritual,” the separated couples come together. Following a five-minute bout filled with tricks and technically challenging dancing, “Tribe” culminates in what can be described as a tribal ceremony, with the men and women dancing around each other in a spiral. It all ends with the Dancesport tribe stomping off of the stage, with the center man carrying his partner on his shoulders in the final act of a performance months in the making.

UCSD Dancesport travelled to Columbus on Nov. 18, 2015, after a five-year hiatus, to compete at the United States National Collegiate Championships for Dancesport, or the largest professional and amateur dance competition in the world. They participated in the formation event, in which a team of couples perform a routine to pre-selected music, with a seven couple formation, and are judged on factors including technique, synchronicity and creativity. After three days of practice and performing in front of the judges, UCSD Dancesport won second-place.

The team is well-known for the fun, complex and often zany formation routines that coach Peter Edwards arranges, even though they never lose focus of both formation and couples dancing. Among them is a Zoolander-inspired routine which won the national championship in 2010. This year, the team danced a routine known simply as “Tribe.” Anything but zany, it is a mixture of intensity and ferocity with forcefully percussive music. Paula Anzenberg, who led the effort to go to nationals since May, was especially excited to perform “Tribe.” The routine was created for the Varsity Dancesport team in 2012 before it was cycled to Junior Varsity two years later. Anzenberg joined the Varsity team the same year “Tribe” was passed down to JV.

“‘Tribe’ is definitely everyone’s favorite,” Anzenberg told the UCSD Guardian. “When nationals came, I said this is my chance to do ‘Tribe’ because it’s absolutely a wonderful, fun routine. Most of our routines are smiley and happy … This was raw emotion … It’s a very fierce routine.”

Fernando Cortez, a new member of the team, felt that the team’s bonding drove its motivation to do well.

“It was just the 14 of us, seven couples,” Cortez said. “It was really compact, really tight. The girls got to bond on their own time. The guys became more than just friends — they became brothers in a sense. And all together we became a family … After having a family aspect, I don’t want to let these people, that I now consider family, down.”

Dancesport arrived in Columbus as an underdog. While some schools that compete in Dancesport have teams made up of students majoring in dance, UCSD’s team is made up of students studying everything from engineering to public health. Also, while other schools often have much more experienced dancers on their teams, the majority of students on UCSD’s national team had only started learning Latin and ballroom dance the year prior to the competition. Just four of the dancers representing UCSD at nationals — Lissette Lozano, Sydney Swanson, Paula Anzenberg and Bharathan Balaji — had had two or more years of Dancesport experience. Coach Peter Edwards, however, knew that his team could succeed through practice and rehearsal.

“The one thing that people don’t realize is that most professionals have failed more times than the beginner has even started,” Edwards told the Guardian.“That’s the whole trick. We just do it again and again. That’s what the kids did that was different from last year. We even left four days early so that I could have them for eight hours a day and acted like a boot camp. Rehearsal is what makes the dancing look more natural.”

Edwards, who coached UCSD through four national championships, was proud of the team’s performance.

“I was incredibly happy,” Edwards said. “The minute they stepped off the floor, I congratulated them, and I said you did exactly what I asked you to do. I never, ever want to leave a question about whether or not we could have done something better. And those kids gave everything they had, and they left it in the hand of the judges to judge and to actually have to make decisions.”

Through their publicity efforts and Go Fund Me page, the team was eventually discovered by a producer for “America’s Got Talent” who invited the team to pre-audition for the show. On Jan. 12, UCSD Dancesport national’s team performed a special 90-second version of “Tribe” in front of “America’s Got Talent” producers. Edwards found the final performance of tribe to be an appropriate closure to the routine.

“It really was [good closure],” Edwards told the Guardian. “It was really fun listening to those guys talking about how it was like getting the group back together after the national championships. They had a great performance for ‘America’s Got Talent.’ It’s just, for ‘America’s Got Talent,’ the talent is very high and dance acts are tough. We are a little different, who knows what will happen. We’ll see what happens, see if we get called back for the live shows or not.”

Whether this was the last step in the team’s tribal journey or a stepping stone, UCSD Dancesport has had a lot to be proud of since it announced its plan to travel to Ohio last May. The team currently has no plans to compete at the 2016 Ohio Star Ball, so it may be several years until the team tops its recent achievement.