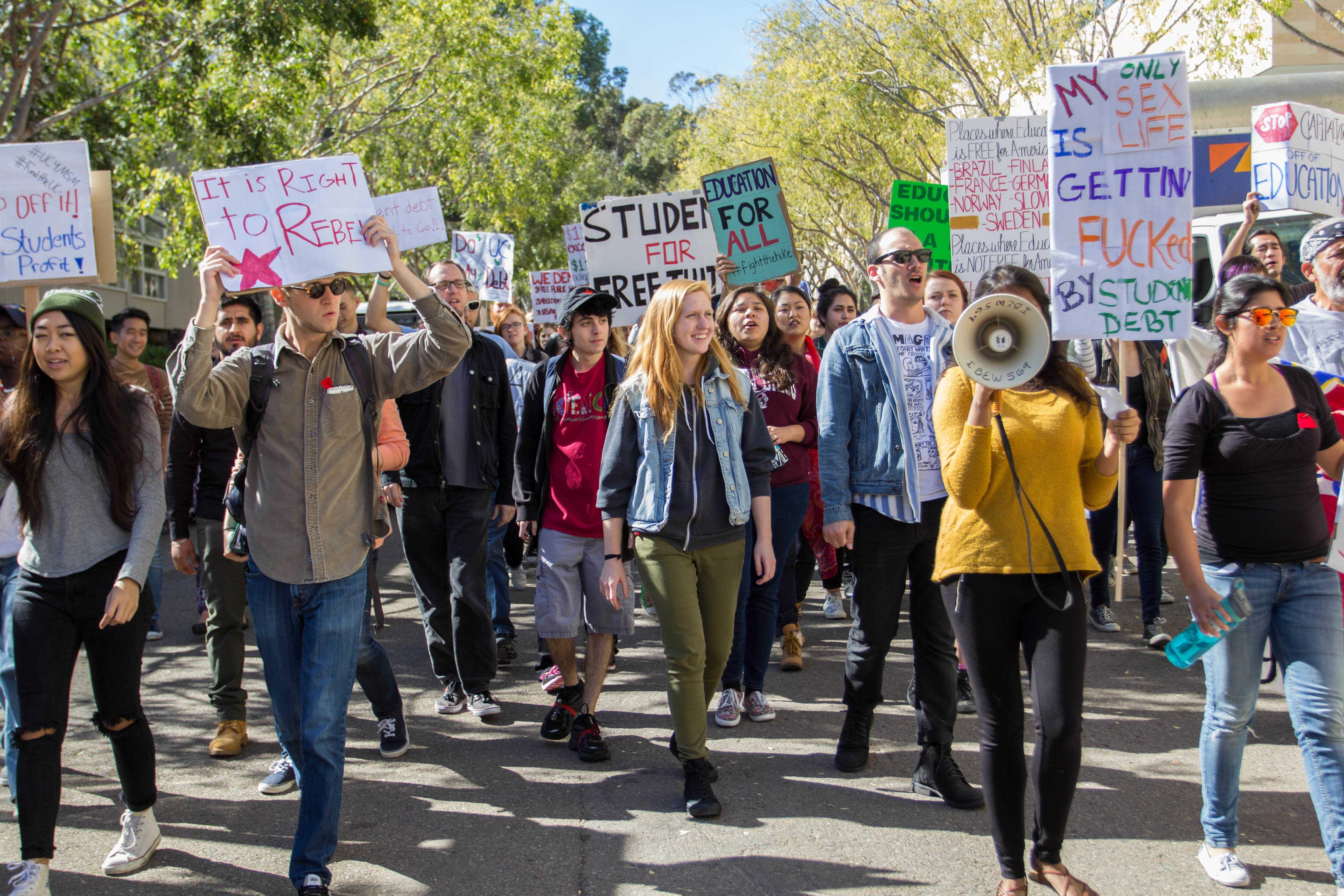 The movement calls for tuition-free public education, cancellation of existing student debt and a normalized $15 minimum wage for campus employees.

“We applaud students who are peacefully exercising their First Amendment rights today across our campuses,” Moser said. “We remain strongly supportive of increased funding for public higher education.”

According to its website, individuals who graduated college this past year are facing over $35,000 in student debt on average. Additionally, over 40 million American college students and graduates now collectively owe $1.2 trillion in student debt, which is more than twice as much as in 2009.

A.S. Vice President of External Affairs Krystl Fabella told the Guardian that these numbers sparked a discussion about the current state of affairs regarding education.

“When UC tuition has more than tripled since 2000, when nationwide student loan debt is $1.35 trillion, when excess administrative spending is $1.1 billion, when campus workers receive less than a livable salary, we are forced to ask what is happening to higher education,” Fabella said. “While demands seem extreme, in the grand scheme of things, students are participating in a movement to resist what is happening to higher education today.”

A.S. President Dominick Suvonnasupa also expressed support for the movement and said the burden of student loans needs to be addressed now more than ever.

“I am extremely proud that our students are organizing to shed light on this very serious issue,” Suvonnasupa told the Guardian. “It is time for us as students to critically examine what is going on financially in higher education. It is time for us to speak out about our lack of support and it is time for California to realize that university students are the most important investment and resource that this state has.”

Moser commented that the UC system already strives for college affordability, but the system can still improve upon its methods.

“At the University of California, 57 percent of California students have their tuition fully covered, and 45 percent of UC undergraduates graduate without any student loan debt; those who do graduate with student loans have a lower average debt than the national student loan debt average,” Moser told the Guardian. “That said, there is always progress to be made, and again, we support increased funding for public higher education.”

Last month, UC President Janet Napolitano implemented the first phase of her three-year Fair Work, Fair Pay plan and raised the University of California minimum wage to $13 per hour, with an eventual increase to $15. However, this wage increase will not affect student employees, who work under 20 hours a week and therefore are not eligible for the plan.

Campuswide Senator Ryan Perez told the Guardian that while more students could have participated in today’s march, it was still an impressive show of solidarity for students who face these issues across the country.

“It was moving to see so many students willing to participate but also a little disheartening that more students didn’t identify with the struggle,” Perez said. “However, in light of the success of student movements across the nation, I am proud to stand in solidarity with all students who struggle for access to higher education.”

Fabella added that the organizers decided to use the march to increase student awareness about the Black Lives Matter movement due to recent incidences of racism at the University of Missouri.

“It is important not to undermine that this movement stemmed specifically from anti-black incidents and that these were struggles faced by and a fight led by black students,” Fabella said. “We demand justice, safety and solidarity for the black students in Mizzou, Black Lives Matter and the prioritization of the safety and success of students of color on college campuses.”

Students marched from the Silent Tree in front of Geisel Library down to Library Walk, walked through Price Center and circled back to the Silent Tree. They chanted, “If education is your mission, stop raising our tuition” and “We see students, ‘UC’ profits.”

One thought on “Students March for Free Education and Fair Pay”