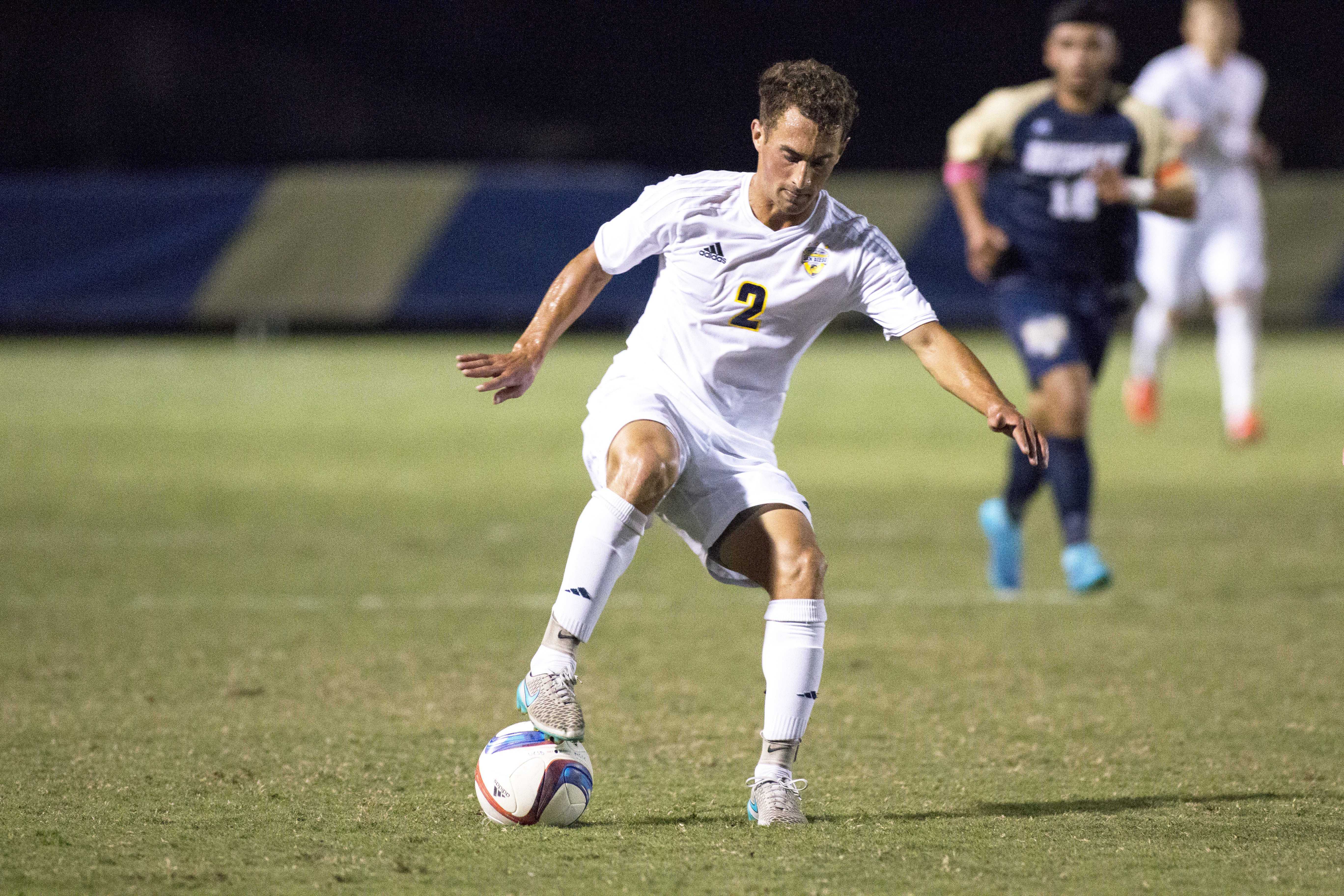 The UCSD men’s soccer team jumped up two places in the California Collegiate Athletic Association standings this weekend after a major come-from-behind victory against CSU Monterey Bay on Friday evening at Triton Soccer Stadium. The Tritons remained in third after a tight game against San Francisco State on Sunday ended in a stalemate. Their record now stands at 5–4–4 overall and 4–2–2 in the CCAA.

UCSD rallied after the half in a tight game against CSU Monterey Bay, taking a satisfying 3–2 comeback victory to kick off Homecoming weekend. The Otters struck first, notching one goal up on the board after junior defense Emmanuel Corona headed a corner kick from freshman defense William Blackburn into the net. Goal number two came in the 42nd minute when freshman forward Adam Voloder hit the target unassisted for his first career goal.

“The team is hitting their stride,” UCSD Head Coach Jon Pascale told the UCSD Athletics Department. “It was a great win, but I thought we made it harder on ourselves. I am proud of the guys tonight, and they showed a lot of character. They respond and rebound very quickly. They really created a lot of good chances.”

The Tritons’ offense didn’t let up, as they out-shot the Otters 14–8 on the night. Freshman midfielder Brandon Monteiro Magpayo came up big, scoring the first two goals of his collegiate career — one in the 34th minute off a cross from junior midfielder Nick Palano and another off a free kick in the 76th. Junior-transfer midfielder Justice Duerksen notched his first goal as a Triton off a penalty kick in the 53rd to equalize.

“It felt good,” Monteiro Magpayo said. “It was nice to finally have an opportunity to finish it.”

UCSD jumped from fifth to third in the CCAA rankings with the victory. It now stands at 5–4–3 overall and 4–2–1 in the CCAA. The Otters, winners of three straight, dropped to a 7–3 overall and a 4–2 conference mark.

UCSD fell just short of success on Sunday, ending 110 minutes of play at a 0–0 stalemate against the Gators.

Freshman midfielder Christian Cordell made an attempt to push UCSD into the lead in the 33rd minute, but his effort went just wide of the mark. Cordell made another effort near the half, but Gator keeper Daniel Boyer was there to deny. The Tritons came within inches of breaking the deadlock two more times in the two 10-minute overtime periods. Monteiro Magpayo hit a high shot just over the goal in the 96th minute; freshman forward Nathaniel Bloom hit a hard right-footed shot in the 108th minute that rebounded agonizingly off the right post.

Redshirt junior Cameron McElfresh racked up four saves to mark his sixth shutout of the season. The Tritons ended the game with a 16–13 advantage in shots.

“We left a little bit on the field”, McElfresh told the Athletics Department. “[But] we have a really deep team, and it keeps us into the game for 90 or 110 minutes.”

The Tritons are back on the road again this week to face its two toughest opponents thus far: They will take on Humboldt State on Friday, Oct. 16 and Sonoma State on Sunday the 18th.