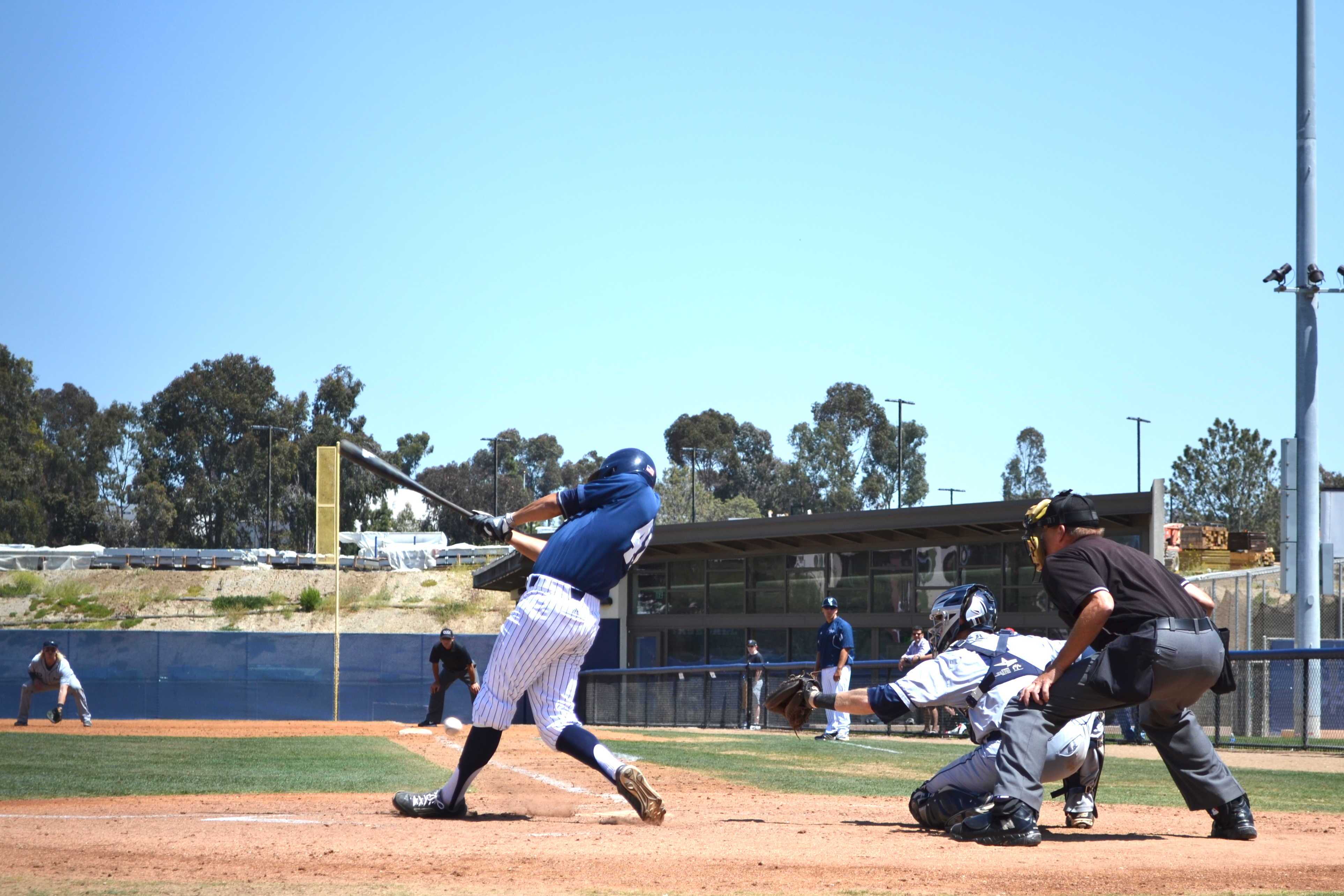 After this weekend’s series, UCSD holds second-place in the CCAA behind Cal Poly Pomona.

Second-place UCSD baseball split a California Collegiate Athletic Association four-game series against Cal State Monterey Bay last weekend while celebrating the official opening and dedication of the new Triton Ballpark. UCSD now stands at 26–14 overall and 21–10 in the CCAA and is sitting just behind Cal Poly Pomona in the league standings.

Junior right-handed pitcher Justin Donatella (7–1) took the mound at Triton Ballpark for game one against Monterey Bay last Friday and tallied his seventh win for the year. Donatella threw for six and only allowed four hits and two walks, one of which was a hit-by-pitch. He now stands at a league-best 0.63 ERA and holds 82 strikeouts and was named the CCAA Pitcher of the Week, as well as the NCBWA West Region Pitcher of the Week for the second time in his career for this week. Sophomore outfielder Jack Larsen had an equally good night at the plate, going 2-for-4 with three RBIs and helped propel the Tritons to the 8–0 shutout win.

“Coming into this week, we talked about getting back to playing our best; let’s make a push to play the best baseball we can play down the stretch here,” UCSD head coach Eric Newman told the UCSD Athletics Department. “Twelve games that are promised to us on the schedule, if we want to get to bonus baseball, we’ve got to play our best right now.”

In the first game of Saturday’s doubleheader, senior pitchers Trevor Scott (5–5), Dan Kolodin (2–1) and Chad Rieser (0–0) combined to produce the 5–0 shutout victory. Scott was credited for the win after going six frames with nine strikeouts. On the offensive front, the Tritons capitalized on a four-run third inning initiated by singles from sophomore shortstop Tyler Howsley and junior outfielder Gradeigh Sanchez. All four runs in the third were marked as unearned.

Transfer junior pitcher Alon Leichman (5–2) had an especially challenging outing in game two on Saturday, allowing eight hits and seven runs in just over two frames recorded. The Triton bullpen rotated through five total pitchers on the mound and afforded Monterey Bay three more runs in later innings for the 10–4 loss at home. The Otters recorded four home runs against the UCSD pitching staff, the highest the Tritons have allowed thus far in the 2015 campaign.

UCSD lost Sunday’s series finale 7–6 to split with Cal State Monterey Bay. The loss came as the Otters broke a 6–6 tie in the top of the eighth and UCSD was unable to answer despite another great performance by Larsen at the plate. The sophomore managed a 3-for-5 showing with four RBIs and two runs.

“We do have a goal of winning the conference,” Newman told the UCSD Athletics Department. “Whether we’re in third or whoever wins, it doesn’t change that we’ve got to focus on playing our best for the next however many games it takes.

The Tritons will travel to Turlock, CA for a CCAA four-game series against ninth-place Cal State Stanislaus with first pitch scheduled for 6 p.m. on Friday, April 17.