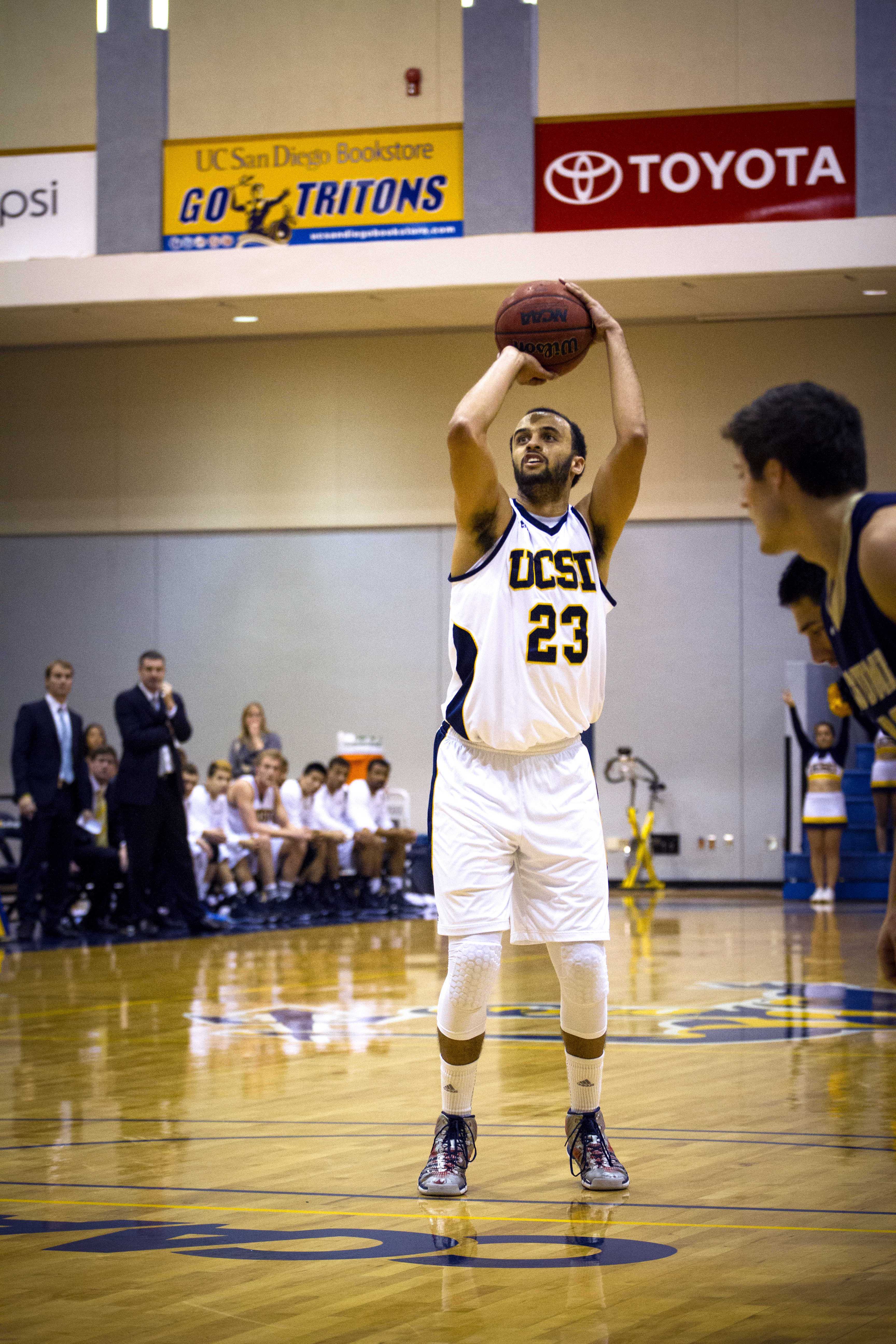 The victory on Friday night was a rare feat for UCSD, as it was the first time the Tritons had defeated Cal State San Bernardino (6-6) since 2009.

“A couple of guys were talking in the locker room [about] how my class [hasn’t] beaten [Cal State] San Bern[ardino],” sophomore guard Aleks Lipovic said. “So [the win] is huge.”

Sophomore guard Jeff Van Dyke scored 16 points in his best performance thus far as a Triton, and UCSD slowly built and maintained a lead against Cal State San Bernardino to hold on for the 74–52 victory.

Lipovic finished with 11 points and three rebounds while Walker scored 13 points and grabbed three rebounds. Lipovic’s three-pointer late in the first half triggered a 13–2 run that gave the Tritons a 12-point halftime lead.

In the second frame, UCSD made an impressive 60 percent of their shots and hit 43 percent of their threes. The Triton bench contributed a solid 31 points, outscoring Cal State San Bernardino’s bench by 16.

Despite their brilliant offensive display, the Triton’s defense played a larger part in the victory. UCSD held the Coyotes to only 35 percent from the field and 3–14 from beyond the arc. UCSD also outrebounded the Coyotes 36–26. The Tritons were able to put the Coyotes away halfway through the second, with the lead climbing up as high as 24 points.

“It starts on the defensive end,” UCSD head coach Eric Olen said. “Our ability to shoot the ball and make some threes, coupled with an improved defense gives us an ability to separate a team.”

The Tritons had a promising start in their game against Humboldt State the following night, starting the game firing on all cylinders. In the first 10 minutes of the game, the Tritons shot 5–7 from three and were able to create a quick 12-point cushion.

However, the Tritons  lost all momentum from that point on. UCSD was outscored 24–9 in the final nine minutes of the half and went into intermission trailing by three.

“We had a little bit of foul trouble,” Olen said. “We kind of lost our energy and focus    for a little bit. They are a good team;  they made a run and were able to take the momentum in the middle of the first and take that into halftime.”

Humboldt was able to ride the momentum going into the second half and increased the lead to 14 with about four minutes left in the game. While everything seemed to go the Lumberjacks’ way, the Tritons could not seem to find an open shot and missed on all eight of their three-point attempts in the second half. After having a string of good shooting nights, Lipovic struggled to find the bottom of the net, missing all of his six attempts from the field.

While Walker finished with 17 points, 12 of those came in the first 10 minutes of the game. Van Dyke also scored eight early in the game but, however, remained scoreless for the remainder of the game.

The Tritons have been stellar defensively during the six-game win streak, holding opponents to only 54 points per game during the stretch, but Humboldt State managed to score 83 against UCSD, a season worst score for the Tritons.

“We just didn’t get it done on the defensive end of the floor,” Olen said. “We’ve had some success recently, and a lot of that been to due us being able to get some stops and we weren’t able to get that done tonight.”

The six-game win streak tied the team’s longest since moving to NCAA Division-II back in 2000. Despite the recent hot surge, Saturday’s loss pushed the Tritons out of a four-way tie for first in standings, putting them one game back from the top and into fourth place.

“This is a marathon,” said Olen. “There are 10 more conference games. The team that is most consistent is the one that’s going to be there at the end.”

The Tritons will host Cal State East Bay this Friday on Spirit Night at RIMAC Arena before playing Cal State Monterey Bay the following night. Both games will tip-off at 7:30 p.m.

One thought on “Win Streak Ends at Six”