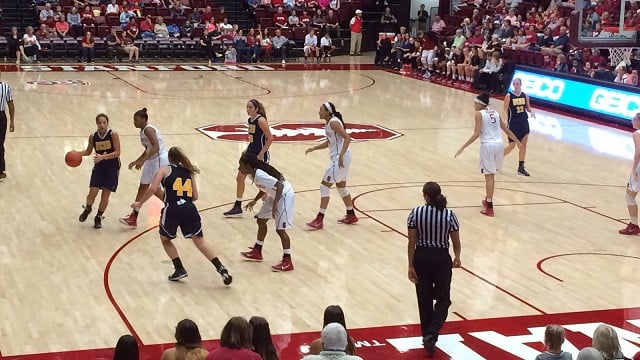 In its first exhibition match of the preseason, the UCSD women’s basketball team fell to Division-I opponent No. 6 Stanford 74–51 on Saturday in Palo Alto. Head coaches and sisters Heidi VanDerveer of UCSD and Tara VanDerveer of Stanford met in competition for the first time as head coaches.

Heidi Vanderveer is 11 years younger than her Hall of Fame sister and longtime Stanford head coach Tara. Both have coached extensively for years, but Saturday afternoon was the first head-to-head matchup between the two.

“It was a great experience,” Heidi Vanderveer told the UCSD Guardian. “It was a lot of fun — a really good experience.”

While national powerhouse Stanford commanded a lead throughout, UCSD came within three points of a tie late in the second half in a 10–0 run.

“We hit shots,” Vanderveer said. “We handled their pressure. We only had four turnovers in the first half. Miranda Seto obviously hit big shots. They didn’t shoot very well; our defense kept them from getting the easy shots.”

Even with the late-game heroics, the Tritons failed to produce defensively and Stanford responded with a punishing 27–7 run to end the game. Stanford had a distinct advantage in the paint with its larger size and outscored the Tritons 22-12.

The Cardinal was led offensively by sophomore forward Erica McCall with 18 points and senior forward Taylor Greenfield with 16 points.

UCSD begins regular season play this Saturday, Nov. 15 against University of Mary at the California State University, San Bernardino in the 2014 Tip-Off Classic. The game will begin at 2 p.m.