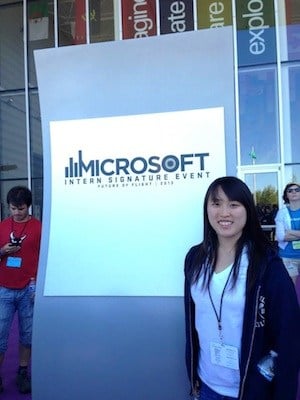 Warren College senior Kirsten Koa’s childhood was filled with various Nintendo and computer games. A kid at heart, Koa’s interests in gaming led her toward choosing computer science as her major. After several internships, a number of corgi gaming applications and four years of hard work, Koa’s passions have resulted in a full-time starting position at Google and department recognition for her work in computer science. This year, Koa has been selected as the recipient of the Computer Science and Engineering Department’s 2014 Excellence Award.

The recipient of the award, a member of the graduating class, is selected by computer science advising counselors and faculty. Koa will receive the award at the Ring Ceremony on Saturday, June 14 at 8:15 p.m. in Warren Mall.

Koa’s resume boasts extensive experience with internships, varying from unpaid research positions to spots on teams in larger companies like Qualcomm and Microsoft. In summer 2012, she worked at Qualcomm on gesture commands, and in 2013, she worked at Irvine-based company MobilityWare on mobile game features and animations. Before landing her full-time position at Google last November, Koa spent her summer in Seattle working for Microsoft on technical projects.

The award marks Koa’s four-year long journey in computer science that all began with her first programming course at UCSD, CSE 8a with professor Rick Ord. She recounts that jumping into computer science had not been the smoothest of introductions.

“I remember getting a ‘C’ on my first midterm, and it really challenged me to step up my game,” Koa said. “I realized I really had to start reading the book, and I even starting doing some programming problems and tutorials online.”

This opened her eyes to the problem-solving side of computer science and how that requires both knowledge and creativity from the programmer.

“What I love about computer science is that I can make things,” Koa said. “It’s creative, and now I feel capable of building things I want to build.”

For Koa, app-building started with class projects before jumping into apps made purely for fun. In her CSE 110 class, Software Engineering, her team designed a nutrition app to help her professor with his Zone diet. Using those tools she learned from the class, she was inspired to create “Hungry Corgis” and “Corgi Memory” — two free Android and iOS apps featuring her Instagram-famous dog, Ventus the Corgi. Now, she and a group of friends are currently developing an app named “Selfie Showdown,” designed to help users take selfies.

Koa believes that the UCSD computer science and engineering department is very supportive and stresses having a supportive community. Koa explained that the encouragement she received from her tutors while taking introductory classes is a major reason why she has continued to tutor for Ord’s classes for the past three years.

“Rick [Ord] always says to form study groups, so one day in 8A, I looked to the person on my left and the person on my right, and I asked them, ‘Hey, do you want to study for the quiz next week?’” Koa said. “And now we have taken a lot of our computer science classes together, and it’s really impacted my experience here. Just because Rick said to form study groups, we ended up just being like, ‘Hey you’re really cool,’ and we’ve been best friends ever since.”

Koa believes that UCSD’s greater emphasis on experiential learning than most schools has shaped her as an engineer. At UCSD, “apply to internships” is almost like a mantra, Koa explained, with faculty members repeatedly encouraging students to apply and to attend job fairs despite rejections or difficulties landing that first internship.

“I learned so much from my internships,” Koa said. “Not just about engineering but about what kind of work do I want to do [and] what makes me happy. I learned more stuff about myself and where I want to be, and those kinds of things you wouldn’t just learn from going to class all the time.”

Those different work environments opened her eyes to the importance of team dynamics. Being a woman was never an obstacle for Koa; however, she did note a disparity in gender participation. Though she never faced any outright discrimination for being a woman in computer science, in two of her internships, she was the only female on the team.

“I’ve learned that you shouldn’t be discouraged that there aren’t that many women in the field,” Koa said. “It makes you stand out and feel special, but being a woman should not feel like a handicap.”

Through a Facebook-sponsored scholarship, Koa was able to attend the 2013 Grace Hopper Celebration of Women in Computing, an annual event held for female engineers.

Koa said she wished she could have attended the annual convention every year and advises other women to take advantage of the convention and the UCSD student organization, Women in Computing, for opportunities to feel empowered as well as to network with other women in the field.

After graduation, Koa is excited to return home to the Bay Area and join Google as a software engineer in the fall. Meanwhile, in between sleeping and relaxing, computer science will continue to be a part of Koa’s life.

“I’m excited to have this summer to relax and wake up not knowing what day of the week it is,” Koa said laughing. “It’ll be great, but I also plan to work on another corgi game and some other applications for fun.”

2 thoughts on “The Game of Codes”