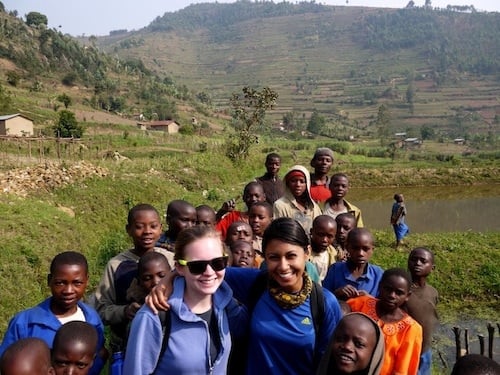 Engineers Without Borders at UCSD, a chapter of a national nonprofit organization dedicated to improving communities at home and abroad, talks about its attempts to bring water to Bungwe, Rwanda.

In the last year alone, the UCSD chapter of Engineers Without Borders has made an impact on the community by successfully completing two domestic projects — Smart Garden and Fly Ash — focused on creating automated gardening systems and environmentally sustainable ways to use cement. The next goal has a wider scope: to help communities get access to water in Bungwe, Rwanda.

Engineers Without Borders at UCSD is committed to carrying out two year-long domestic projects and one international project every year. With regards to domestic projects, chapters may apply to start a new project or “adopt” an already open project. Specific members may also volunteer their time apart from their chapters.

International projects are generally executed over a longer period of time and on a larger scale, as they are organized with the broader intent to improve the global community. The projects fall into seven categories: water supply, sanitation, civil works, structures, energy, agriculture and information systems.

EWB at UCSD’s current international project has been ongoing since 2012, as it has been focusing on increasing water supply in Bungwe, a community in the northern province of Rwanda.

“It all started with the leader before us, Nisha Sheph, who is a graduating senior this year,” freshman Aaron Graham, one of the selected leaders for the upcoming school year, said. “She’s a nanoengineer, and she wanted to do community-driven environmental projects that would help out communities elsewhere.”

EWB’s Rwanda Water Project aims to design a tank which would store and filter rainwater for people to drink. Because Bungwe is located on top of a hill, it would normally take two hours to go down to retrieve water and climb up the hill again. Thus, EWB sees the tank as necessary in Bungwe to making water availability more convenient.

“Since it rains there about half the time, we want to catch the rain and filter it out and use it for drinking and other household purposes,” Graham said. “The tank would allow them to have more access to water.”

In the summer of 2013, EWB went on an assessment trip which allowed four of its members to physically visit Bungwe in order to fully understand what resources individuals there had and how much help EWB could provide through the project. They are currently in the process of designing the rainwater catchment tank with a cheap and environmentally sustainable material called ferrocement, a mixture of cement, sand and steel and chicken wire. EWB started designing the tank in the winter of 2013 and hopes to implement the actual tank by September 2014, when it makes a second assessment trip.

“We’re going to need several trips in the next few years to continue implementing the design and finishing it,” Graham said, “That’s the main goal of the project, but there’s so many things around it like the education, the application for grants and we’re also doing a side project of making a playground so that the children after school can have a nice place to play sports at. Right now, they don’t have much facilities over there.”

EWB plans to continue working on the tank design and develop a stronger connection with the community. Graham explains that the group’s goal is not only to implement the tank in Bungwe but to help local individuals.

“We want to get the community involved in order to allow them to sustain the project even after we implement it,” Graham said. “We also understand that they don’t have enough financial resources so we have to figure out how to find the lowest cost possible to implement the tank.”