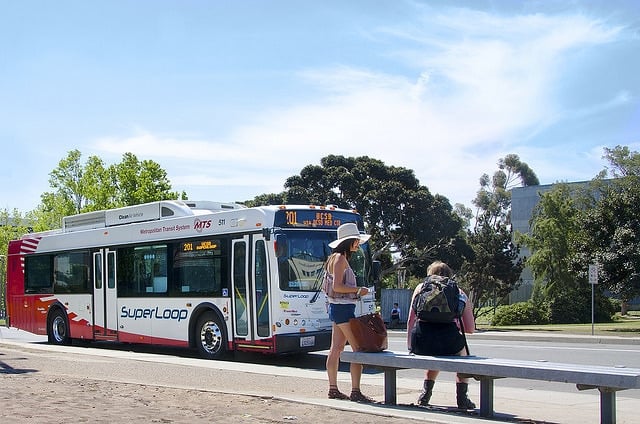 A.S. Council has released a special election guide with official statements for and against passage of this week’s transportation referendum. We analyzed seven claims from both sides of the argument and determined each statement’s validity.

Statement:
“A ‘yes’ vote ensures preservation of Arriba/Nobel City Shuttle services for the next five years.”

Determination: Speculative
Never does the actual referendum language mention the Arriba/Nobel shuttle service or ensure its specific existence for the next five years. The referendum says that “UCSD Transportation Services will operate a city shuttle program,” but that is the closest thing the referendum offers to suggest the continuation of the Arriba/Nobel shuttle service. The language is vague toward UCSD Transportation Services and does not hold TPS to anything concrete regarding actual shuttle lines, suggesting they may still cut certain stops or change the line altogether. Furthermore, the only revenue the referendum allocates to the continuation of the shuttle service is what is left over from what was used for the Regional Transit Pass. The Student Transportation Advisory Committee may use the revenue to keep Arriba/Nobel in service, but the committee also ultimately may decide it is more cost-effective and beneficial to cut or change Arriba/Nobel. If so, there is nothing in the transportation referendum preventing them from making such a decision.

Statement:
“A ‘yes’ vote ensures establishment of student oversight — no changes without our consent.”

Determination: True
In regard to the extent of student control over these proposed fees, the transportation referendum proposes the establishment of a new Student Transportation Advisory Committee. STAC will be composed of a student chair and at least 80-percent student votership. Though 100 percent of the fee revenue is already allocated to the acquisition of a transit pass and financial aid for need-based students, STAC will have the power to decide how to use any revenue left over from the purchase of the transit pass if such revenue exists. In addition, according to the referendum, TPS will merely administer these fees with no actual power to decide where they go, and the referendum explicitly states that the fee cannot be used to pay university employees. With this design, the students on STAC will decide how to spend the money generated by the student transportation fee.

Statement:
“When using MTS services, students will either pay per ride [or] have to purchase
individual passes ranging around $100 per quarter!”

Determination: True
The referendum’s proposed $49.96 fee indeed is about half the price of a Metropolitan Transit System bus pass per quarter. Currently, the rate MTS charges is $31 per month for UCSD students, translating to a $93 fee for a given quarter. If the referendum fails, transit users will either have to pay this higher monthly fee or pay per ride. In the case that one pays per ride, the urban and local bus route fare is $2.25 per ride. Thus, the proposed fee translates to 22 one-way rides if paid per ride, which could get someone to Ralphs and back 11 times in a ten-week quarter. For those who use the bus system sparingly — less than 11 times — paying per ride could be more cost-efficient. On the other hand, the referendum provides a good deal for frequent commuters who plan to use the MTS system several times a week.

Statement:
“Without a bus program, more students will drive to campus — parking lots will be more crowded.”

Determination: Speculative
An unsubsidized MTS regional adult monthly pass is $72 which translates to $648 for nine months, while an S parking permit for nine months is currently $549 and is expected to increase. With additional vehicular expenses such as gas, car insurance and maintenance, an unsubsidized regional pass may still be more fiscally beneficial than bringing a car to campus. Parking rates may also go up regardless of the referendum, as TPS is currently $3 million in debt. This is in line with the parking rate increase that TPS proposed last year, which can be found on moveucsandiego.ucsd.edu. TPS said that the proposed 15-percent increase in the cost of A permits and 10-percent increase in the cost of B and S permits were to help deal with last year’s $2.2 million budget deficit problem, and since that debt has increased, students may expect an increase in parking rates, as well. Furthermore, TPS does offer alternatives to commute by car, such as Carpool, Vanpool, Coaster Club, Pedal Club, Zimride access and campus shuttles that remain unaffected by the transportation referendum. Therefore, this statement appears to be a speculation due to the many complicating factors in how parking may be affected with the new changes that the referendum proposes.

Determination: Misleading
The referendum language states that Metropolitan Transit System would only receive a portion of the money raised by the fees and also stresses that the money raised goes to students, as well. According to the referendum, 71 percent of the fees is going to MTS to pay for the quarterly passes for students. The money going to MTS allows students to obtain Regional Transit Passes that allow students unlimited access to any MTS or North County Transit District bus, trolley or light rail routes for a quarter (excluding rural and premium express routes). The rest of the funds will go to supporting students who have to pay the fee. Twenty-nine percent of the raised money will go to the Financial Aid Office to provide aid to students based on financial need, as the proposed transportation fee would be included in financial aid determination. Therefore, this statement is misleading as it implies that all of the funds raised by the fees will go to MTS, which is not the case. Furthermore, the funds that do go to MTS will be used solely for the Regional Transit Pass.

Determination: False
The referendum clearly states what will be done with the money raised from the student fees if the referendum passes. At a basic level, the referendum is transparent in specifying that students who pay the new, mandatory fee will receive the Regional Transit Pass. After the 29 percent that goes to financial aid is factored in, the referendum specifies that any remaining money not used to provide the Transit Pass will go to the Student Transportation Advisory Committee to develop and promote alternative transportation methods and not to MTS. The referendum states that STAC’s role is to increase the safety and sustainability of methods such as bicycling, bike sharing, carpooling, car sharing, skateboarding and walking. The STAC would also be responsible for making Transportation Services’ annual budget reports available to the public to increase transparency about how the raised money is being used.

Statement:
“Every five years, there will be a new referendum with a higher fee for the same services.”

Determination: False
Though the writer of this con statement refers to UC Santa Cruz, UC Riverside and UC Berkeley as comparisons in the trend of increasing transportation fees, the most crucial part of this statement is the actual vote on whether to increase the fee proposed in the referendum, which the writer conveniently leaves out. The proposed fee in the referendum cannot simply increase on its own without the student body’s consent via a majority vote. After the referendum expires in spring 2019, students will vote again on whether to change it or keep it at all, and the student body will not necessarily vote to increase the fee. They may vote to keep it the same price or may even vote not to bring back the referendum at all. The only way the fee will increase without a doubt will be through inflation, which affects tuition every year anyway, and which the referendum clearly outlines as 1.5 percent every quarter beginning in Fall Quarter 2015, or roughly 50 cents per quarter.