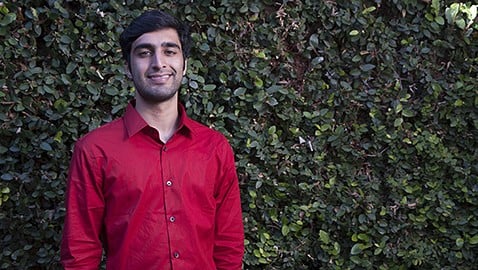 The Tritons Forward slate, led by presidential candidate Robby Boparai, won every A.S. Council position on Friday, April 11 after weeks of campaigning for this year’s elections. Additionally, students voted in favor of passing a referendum for bylaw revisions and a non-binding referendum in support of a student graffiti-art space.

“I think our ideas resonate well with a lot of campus,” Boparai said. “We made sure we were thinking positive the whole time. We wanted to make sure people supporting us knew our ideas.”

A.S. Elections Committee members announced the results on the Triton Steps around 11:30 p.m. and Tritons Forward members erupted in celebration. The winners included newly elected A.S. President Boparai, VP Campus Affairs Amber Hawthorne, VP Finances and Resources Igor Geyn and VP External Allyson Osorio. An anonymous source told the Guardian said that because the paperwork for the Eleanor Roosevelt College Senator was not turned in to A.S., there is no official ERC Senator yet.

Osorio said that she does not know how Tritons Forward was able to secure every spot but speculates that it may have been because the slate was composed of members from many different groups and perspectives on campus.

“It feels unreal; we woke up yesterday still questioning what happened,” Osorio said. “The slate is beyond excited and motivated and happy, but before anything, they’re just ready to get to work.”

The results were originally supposed to be announced at 5:30 p.m. However, grievances against both slates were also being heard that evening before the announcement. The Elections Committee addressed nine grievances and the Judicial Board heard three appeals.

The passed bylaws referendum will institute several changes to the structure of A.S. Council, starting in the Spring 2015 elections: replacing the position of VP Finances and Resources with an appointed Financial Controller; replacing the position of AVP Student Organizations with a Director of Student Organizations; the addition of two International Senator positions; the removal of one First Year Senator position; and removing the Academic Senators’ vote from A.S. Council while creating an Academic Representatives Council on which they will have a vote on the condition that Academic Senators do not run on any slates.

The non-binding referendum in support of a graffiti-art space merely intends to keep the issue in conversation and for use as leverage against the administration to show that such a space is important to students.

The new A.S. Council will begin its term and pick new cabinet members in Week 5.