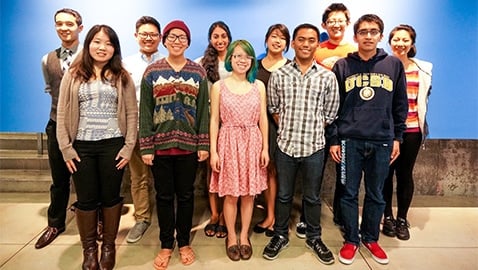 To Sneha Jayaprakash, social media and game design are not typical avenues for encouraging volunteer work. However, through her new application, Bystanders to Upstanders, the Muir College sophomore aims to inspire high school and college students to get involved in their communities. The free app will be available in a limited release for beta testing at the end of April in app stores for Android, iOS and Windows 8. Jayaprakash predicts that the app will be available to everyone starting in late May.

With a $2,500 prize from Microsoft’s Challenge for Change in spring 2013 already under her belt, Jayaprakash officially received $10,000 from another Microsoft program, Imagine Fund, this past January to combine gaming and social change — binging her funds to a running total of $12,500.

Jayaprakash, a computer science major who is working on the actual code for the app, currently has a team of 11 UCSD students to continue development on Bystanders to Upstanders, which utilizes gaming strategies such as competition and a point system in order to encourage users to improve their communities in small, simple ways.

“You have this picture of a true volunteer as someone who is willing to go out there and maybe travel to another country and volunteer,” Jayaprakash said. “No one thinks, ‘Hey, there’s really easy ways to make change in your own community and in your own house.’”

Users can complete a challenge related to a particular issue and gain points by providing photo evidence. Tentatively, there are six categories to choose from: random acts of kindness, environmentalism, outreach, fundraising, social awareness and community service. As an example, Jayaprakash explains how users can influence their own senior citizen community.

“Depression in senior citizens is a huge problem that you don’t really hear a lot about, so we have a couple challenges that give ideas on how to reach out to the senior citizen community nearby,” she said. “It’s really easy, things like […] starting a pen pal relationship — small things like that where it’s really easy to get proof.”

Competition, Jayaprakash says, is a key component in gaming that she believes will translate to her app and engage users in the way a video game would.

“I thought, ‘What are people really interested in? What do they spend a lot of time on?’ And the people on my floor last year would spend all night playing video games,” she said. “So if you have people [who are] so interested in gaming that they’re willing to sacrifice everything else, there has to be a way to take that addiction and put it into something good. So I thought if we incentivize it and put points to it, that gives it that competitive aspect that [people] really enjoy in traditional video games.”

An active volunteer since the eighth grade, Jayaprakash knew she wanted to spend her life giving back to others.

“As for what I wanted to do as an actual career, it’s really hard to make a living off of doing good things, which says something about our society,” Jayaprakash said.

As for combining her interest in social change and her love for computer science, Jayaprakash became inspired by the book “Reality is Broken” by Jane McGonigal, which discusses the significance of gaming and the impact it has on the world. Jayaprakash explains the greater implications of a simple game designed to get users to do chores.

“There’s a game [in the book] that combines chores and game design to make chores fun, so [it incentivizes] cleaning the toilet,” she said. “If you can make people do something like clean the toilet, social work is a lot more rewarding.”

Since acquiring funding from Microsoft, Jayaprakash has been contacted for many opportunities, from encouragement to apply to a peace prize competition which would award $25,000 to its winner, to the possibility of being featured in Glamour magazine’s Top 10 College Women.

Currently, Jayaprakash’s goals for her project include expansion and involvement of the UCSD community through participation in experiments supervised by the team. In addition to the 11 students working on a variety of areas, from technology to business and marketing, Jayaprakash hopes to bring in five more people, two to aid in humanitarian outreach and three to help organize the experiments into events on campus.

The aim of these experiments, Jayaprakash says, would be to gather data about the project’s target population in order to pinpoint exactly what the team can do to help encourage students to actually take action and help their communities. Of the over 120 interviews her team conducted so far, Jayaprakash notes that there are many passionate students who have done little or lacked resources to actually further their causes.

“Even people who are really interested in [projects] don’t get involved unless it’s facilitated for them,” she said. “We want to test out to what level facilitation makes a difference [and] what we need to do to get people to come out and do things on their own.”