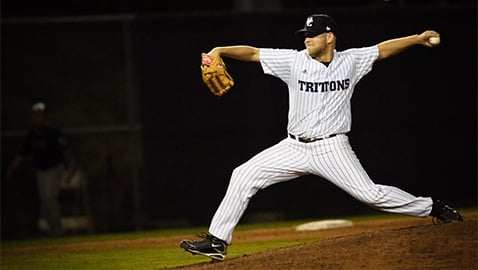 No. 39 ranked UCSD split its first conference series against No. 12 Chico State last Sunday, Feb. 16 with a win. The Tritons are 5–4 on the season and 2–2 in California Collegiate Athletic Association action.

In the series opener last Friday, sophomore right-handed pitcher Justin Donatella out-pitched Chico State’s Nick Baker to give UCSD a win in its first conference game of the season. Donatella shut out the preseason favorite Wildcats in six frames, only allowing one hit and throwing six strikeouts in his first career-start in conference play for the 8–1 win.

“I just attacked the hitters,” Donatella said to the UCSD Athletics Department after UCSD’s first game, Friday, Feb. 14. “Once our batters gave us the lead I decided to keep it.”

The Triton offense demoralized the Wildcats’ All-CCAA First Team pitcher Baker early and ended his night in the third after UCSD scored six runs on six hits. The all-conference selection only lasted 2.1 innings against Triton bats. The highlight of the game came in the third inning when senior designated-hitter Nick La Face tripled to left field and brought in two runs. UCSD earned 12 hits on the day and now leads the conference with 20 hit-by-pitches.

But UCSD could not repeat its domination over the Wildcats in a doubleheader on Saturday, as Chico State handily won the first game 7–2 and took the second game 3–1.

Junior left-handed pitcher Trevor Scott took the mound for the Tritons in game one and threw a three-run first inning and allowed another Wildcat run in the fourth. UCSD was unable to climb out of the deficit against Wildcat stars Marcos Lara and Luke Barker, who largely shut out the Tritons from the mound. Triton batters were unable to produce hits in critical moments and left 11 runners on base to only score two runs.

Chico State found the board early in game two with a sacrifice fly for a single RBI in the first. The Wildcats added two more in the fourth from another single RBI and a bases-loaded walk-off of senior right-handed pitcher Blake Fassler for his first losing decision. UCSD again faced excellent pitching in the nightcap, this time from Chico State’s Brad Lohse who threw six shutout frames for the Wildcats and struck out five, only allowing four hits.“Across the board they made more plays than we did,” UCSD head coach Eric Newman told the UCSD Athletics Department after the loss. “They just outcompeted us.”

The closer was won by UCSD for the split, largely due to the performance of sophomore right-handed pitcher Troy Cruz’s presence on the mound. Across seven innings, Cruz allowed only a pair of runs on six hits and earned two strikeouts. Senior right-handed pitcher Scott Zeman closed out the game in the ninth with just one pitch by forcing a fielder’s choice grounder.

“I felt like it was a pretty big game,” Cruz said to UCSD Athletics Department. “It was a good opportunity to get the ball today.”

On offense, UCSD padded its early lead with a four-run fourth but failed to produce more runs in subsequent innings. Redshirt freshman outfield Brandon Shirley batted a team-high .444 in the series and went 2-for-4 in the final win.The season opening stretch has held a list of formidable opponents for the Tritons, a trend that continues into next weekend as UCSD faces Cal Poly Pomona.

“Next weekend is going to be another great series,” Newman told the UCSD Athletics Department. “I expect us to come out with a couple wins.”

UCSD softball continues CCAA action in another four-game series against undefeated No. 15 Cal Poly Pomona on Feb. 20 to Feb. 22 in Pomona, Calif.