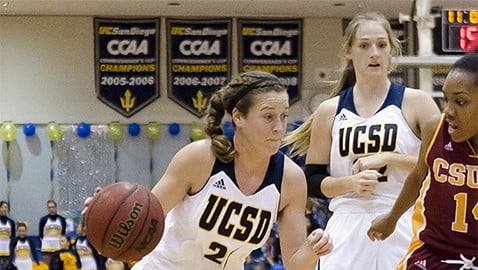 After losing four straight games, the UCSD women’s basketball team bounced back on Thursday, Feb. 13 with a 56–48 road win against Cal State Monterey Bay, followed by a 59–50 road victory on Saturday over Cal State East Bay. The Tritons are now in a three-way tie for fifth place in the California Collegiate Athletic Association.

On Thursday night, the Tritons shot just 33 percent (17–52) from the field, and were only 1-for-18 from beyond the arc, though UCSD still managed to secure a crucial conference contest.

“[It was] a rather unattractive game,” UCSD head coach Heidi VanDerveer said. “In the first half, we had been on a little slide, but I think at halftime our team really decided they wanted to set the tone for the rest of the year. [We] came out and played really hard.”

At the half, UCSD gridlocked at a score of 23–23. The Tritons broke ahead early in the second period, going on a 10–0 run to take a 37–30 lead. The Tritons held the advantage for the rest of the night.

Senior forward Erin Dautremont led the Tritons to victory against the Otters, earning her fourth double-double (13 points, 10 rebounds) of the season against Cal State Monterey Bay.

“She can take over a game,” VanDerveer said. “She can score in a variety of ways, and she had two or three plays in the second half that really got us the separation we needed.” 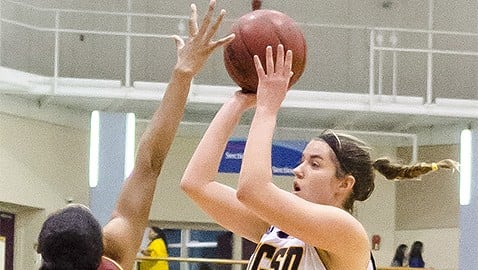 The following night, UCSD took on Cal State East Bay. Both teams desperately sought a victory as they came into the game stuck in a four-way tie for fifth place in the CCAA conference.

The Tritons found themselves down 14–2 soon after the tip.

Freshman forward Cassie MacLeod then led UCSD on a 13–0 run of its own — scoring eight points herself during the spree — to help the Tritons gain the lead.
“Cassie is very talented, and I think [she] is going to be a great player for us,” VanDerveer said. “The game was kind of like a snapshot of what I think she can do consistently.”

The Tritons closed out the half with a score of 29–20, an advantage they would only extend throughout the rest of the night.

UCSD shot a solid 39 percent from the field and out-rebounded the Pioneers 42–31 for the game. Perry led the Tritons with 14 points, while MacLeod tallied 12 points along with a team-high eight rebounds.

“In the bigger picture, [winning the game] was something we had to do in order to get to where we want to go,” VanDerveer said.

After the successful weekend on the road, the Tritons now have only four games remaining to qualify as one of six teams chosen for the league tournament.

“We need everyone getting better so our team can get better,” VanDerveer said. “We’ll focus on what we have to do this weekend and not look too much further ahead.”

The Tritons will round out their home schedule this week when they host San Francisco State on Friday, Feb. 21 and Sonoma State on Saturday, Feb. 22. Both games will start at 5:30 p.m. at RIMAC Arena, with Saturday’s game preceded by a ceremony honoring UCSD’s four graduating senior players: Kim Manlangit, Rachel Marty, Megan Perry and Erin Dautremont.