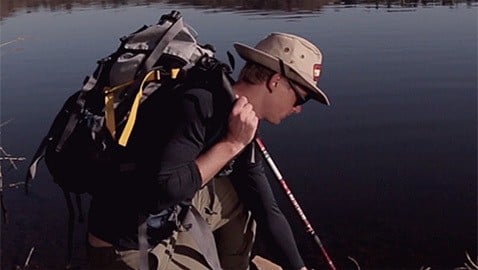 This concept is “citizen science,” which is the mantra of Distributed Health Labs. The research lab has big aspirations, namely establishing a network of 1 million people using their low-cost devices and apps by 2015. UCSD School of Medicine faculty member Eliah Aronoff-Spencer and UCSD research scientist Albert Yu-Min Lin founded the lab in 2012. The group is based at the UCSD Qualcomm Institute and is developing its first project, dubbed the Oasis Project.

The Oasis Project is the lab’s initiative to develop sensors to measure environmental and health data. These sensors are palm-sized ellipsoids that connect via Bluetooth to a phone to collect data. The lab has already developed an app called My.Oasis in the Apple Store that compiles data its users collect.

“For instance, in [Google Maps], you get map data [about traffic] when you send your speed info to Google,” Patno said. “They compile the data you send to get good traffic data. The more people report, the better the traffic data is. We want to do the same thing with health.”

Distributed Health Labs is applying this idea in Mongolia with environmental sensors that measure the content of poisonous heavy metals in water, particularly lead. Oasis Project Manager Beke Chuluun, who emigrated from Mongolia at the age of 17, pushed the lab to apply its sensors in his home country, where mining has caused significant water pollution. The lab hopes to equip nomads with sensors to compile data on water contamination to create a map of clean water sources that will help nomads keep their families safe.

The lab is also designing vital monitor sensors to measure temperature, heart rate, breathing, pulse, blood oxygen levels and electrocardiogram information. Experiments using a prototype sensor are already being conducted in Mozambique in collaboration with the UCSD School of Medicine and the Universidade Eduardo Mondlane in Maputo, Mozambique.

As of now, the Distributed Health Labs has raised $9,605, which is significantly short of its $50,000 goal. The campaign ends Feb. 20. The group will be able to keep whatever funds it has raised by that time, minus a 9 percent fee for not reaching its goal.

Though received well in academic circles, the Oasis Project hasn’t gained much traction with the public, as the group’s actual sensors are still in development and the project’s main goal of citizen sensing isn’t as tangible as other products advertised on Indiegogo, such as Wong Fu Productions’ first feature film.

Distributed Health Labs aims to earn more funding to fuel the development of their sensors. They hope to win the Qualcomm Tricorder XPRIZE, a competition to develop effective, low-cost health diagnostic tools. The prize is $10 million.

The group is also looking for student volunteers to join their team. Interested students should visit the lab’s website at www.dhlabs.calit2.net.

Even though Patno doesn’t receive a wage for his contributions to the Oasis Project, it’s the end goal that keeps him and the rest of the group motivated in the face of their many obstacles.

“If these [technologies] actually work, we can actually do sensing and get health information that you wouldn’t normally get access to,” Patno said. “The open source nature of our work is really exciting, because we can see how other people use our technology. It’s always a fun thing to be a part of.”