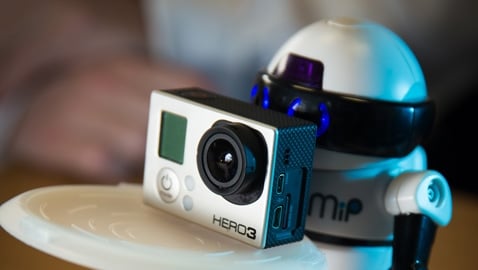 In a grand gesture to kick start 2014, UCSD engineers from the Jacobs School of Engineering and toy manufacturing company WowWee wowed the technology industry at the International Consumer Electronic show in January with a unique, self-balancing toy robot.

The device’s full name is Mobile Inverted Pendulum — though it’s endearingly known to the public as “MiP.” Scheduled to hit the toy market in May 2014, MiP is a seven-inch-tall, battery-powered, multifunctional unit that looks like a miniature hybrid between R2-D2 from Star Wars and EVE from Pixar’s “WALL-E.” Not only is it able to keep itself standing upright, but it can do so while holding and balancing other objects, like a second MiP robot.

MiP’s developers believe that the inverted pendulum technology, coupled with the toy’s interactive response to simulate humanlike motor skills, is what sets MiP apart from other statically stable robots.

“The one word I like to use is ‘organic’ — if you take a push, it will step back to respond,” UCSD professor and Coordinated Robotics Lab Director Thomas Bewley said.
MiP is also designed to be “hacked” by users to create additional custom features. Capable hackers can access MiP’s processor through the three-pin connector located on its back. Bewley’s own MiP unit carries a fire-ready bazooka that shoots out bubbles on its shoulder. And for those who lack the hacking expertise to create a bubble bazooka, Yanofsky foresees the production of hacker kits made for the average consumer to join in on the excitement.

The idea for MiP was originally presented to WowWee in 2006, when Assistant Director of the UCSD Technology Transfer Office David Gibbons became interested in the robots at the Coordinated Robotics Lab in the UCSD Jacobs School of Engineering. Gibbons brought WowWee founder and President Peter Yanofsky to evaluate the designs for commercial use. Back then, the initial technology behind MiP was presented as a raw series of inverted pendulum robot designs. Three years later, UCSD began its partnership with WowWee.

“In this case, we allowed our relationship to follow its course and everyone to get comfortable with each other,” Gibbons said. “And when we did the licensing agreement, it was just a piece of cake.”

But MiP’s entire creation and design process wasn’t all smooth sailing. UCSD Ph.D. candidate Saam Ostovari, head student in charge of the MiP project, explained that the biggest difficulty came in translating an expensive, academic, inverted-pendulum design to a cost-efficient yet fully functioning robot to be massively produced in factories.

“To put the process into perspective, it took me about a month or two just to get the initial prototype working and an additional four to five months to get the right motors built in the factories,” Ostavari said.

Though MiP representatives hesitated to project a direct estimate of the revenues their product may generate, they are confident about MiP’s reception after its official release in the next few months.

“We assume that we will get into every major retailer in the world,” Yanofsky said. “Our marketing is going to be targeted towards the older kid in all of us. It will get exposure everywhere as a toy and an electronic.”

Yanofsky hopes that MiP will not only be an innovative toy, but also an indicator of potential technology. He and the rest of MiP’s creative team asserted that MiP is only the beginning of a long series of products to come.

“We’ve already looked into exploring other robotic concepts,” Yanofsky said. “2015 and 2016 are going to have some amazing things coming out at UCSD — and in WowWee.”