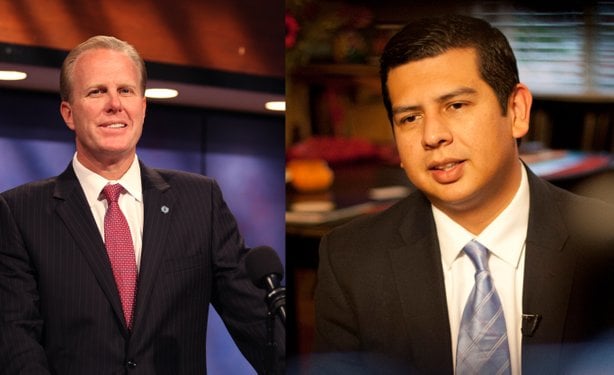 The election to elect a new mayor will be held Feb. 11

A recent 10News/UT-San Diego poll shows that Kevin Faulconer and David Alvarez are neck and neck, with Faulconer possessing 47 percent of the vote and Alvarez taking 46 percent. With less than five weeks before the runoff election on Feb. 11, the two candidates are busy earning money and gaining supporters for their campaigns.

UCSD political scientist Steven Erie told UT-San Diego that the close race between the two candidates led them to agree on having six debates.

“You’ve got two city councilmen who each represent a portion of town competing citywide in a low-turnout election, and this is a great way to introduce themselves to the gazillions of voters who didn’t come out Nov. 19,” Erie said.

The runoff election was scheduled as a result of the special election that took place on November 2013 to replace disgraced mayor Bob Filner. Faulconer led with 43.6 percent, followed by Alvarez with 25.6 percent of the votes. UCSD political science professor of practice Nathan Fletcher came in third with 24.3 percent of supporters while former San Diego city attorney Michael Aguirre placed fourth, with 4.44 percent.

Faulconer and Alvarez will face each other in a runoff election since no candidate received over 50 percent of votes from the November 2013 special election.

Although he will not be teaching winter quarter, Fletcher will return to teaching political science at UCSD for the spring quarter after announcing his retirement from public life.

Republican candidate Faulconer and Democratic candidate Alvarez kicked off their campaigns recently on Jan. 4 with the hopes of winning more votes, specifically Fletcher’s supporters in the previous election. Faulconer’s campaign has raised around $430,000 through the contributions of business groups and Republicans while Alvarez’s campaign raised around $467,000 through the efforts of labor groups and Democrats.

Alvarez boasts the support of Democratic state legislators that include Assembly Speaker John Perez, Sen. Marty Block and San Diego Assemblywomen Toni Atkins, Shirley Weber and Lorena Gonzalez — some of whom were supporters of Fletcher in the previous election.

No candidate currently has plans to campaign at UCSD. The six debates are to be broadcasted on television and radio starting on Jan. 15, with two debates occurring every week until the end of January.

Voters will begin receiving their mail-in ballots next week.