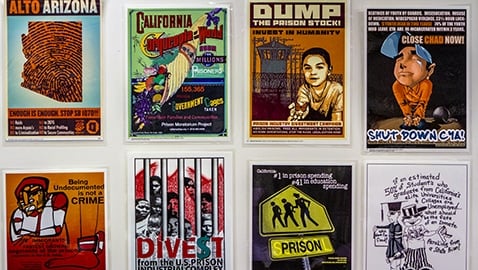 A new organization on campus seeks to raise awareness of the institutionalized racism of the U.S. prison system with a poster art exhibition

The United States of America is a prison nation. According to the Center for the Study of Political Graphics, even though the U.S. holds only 5 percent of the world’s population, it houses 25 percent of the world’s prisoners — the largest percentage in any region. This percentage has quadrupled between 2008 and 2011 alone, a span of a mere three years. The statistics suggest that mass incarceration is an unnoticed reality in the U.S. today, which compelled Revelle College junior Eunice Ho to establish a new organization on campus this quarter called Students Against Mass Incarceration.
SAMI is dedicated to spreading awareness at UCSD about the prison system as a form of institutionalized racism. In November, the club seized the opportunity to display the “Prison Nation: Posters on the Prison Industrial Complex” art exhibition from the archives of the Center for Study of Political Graphics. The entire collection of posters was created by artists, activists and organizations around the world who aim to speak out against mass incarceration. Currently, 75 posters are on display — 25 in the Cross-Cultural Center and 50 in the West Wing of Geisel Library on the second floor. The pieces will be on display until January.

The exhibit features powerful images that may force viewers to reevaluate their perceptions of the prison system. For instance, one poster depicts the U.S. flag with prison bars for stripes and lock holes for stars, emphasizing how prisons have become such an integral yet unnoticed part of the nation. Another poster equates prisons to slavery, juxtaposing a bird’s eye perspective of a prison and that of a slave ship.

“The goal [of the exhibit] is to challenge the way people at UCSD think about the prison system and to bring awareness,” Ho said. “A large aspect of this is through the provocatory aspect of those pieces — not because they are exaggerated, but because they bring focus to issues in the dark.”

“Prison Nation” explores the various facets of the prison system, including the treatment of women prisoners and political prisoners and the controversial laws of the system, such as the Three Strikes Law in California and the Stop and Frisk Law in New York. As defined by Stanford Law School, the Three Strikes Law condemns a life sentence for nearly any crime, regardless of its level of severity, if the defendant has a criminal record of two previous convictions that the California Penal Code deemed as serious or violent. The Stop and Frisk Law allows officers to stop, question and frisk people at random to check for weapons and illicit substances.

The part of the exhibit that personally touches Ho the most is a display in the Cross-Cultural Center with the following quote by American union leader Eugene Debs: “While there is a lower class I am in it, while there is a criminal element I am of it, and while there is a soul in prison I am not free.”

Ho has felt similar emotions regarding the Prison Industrial Complex. There is a disproportionate percentage of black and Latino prisoners on a national level; according to the Federal Bureau of Prisons, 37 percent of federal prison inmates are black, and 34.9 percent are Latino. In addition, numerous companies, including big names like Starbucks and Microsoft, invest in corporations that exploit prison labor at rates as low as 93 cents a day, according to the Prison Policy Initiative.

“I became enraged about this injustice, which is so relevant but not widely covered enough,” Ho said. “And yet we don’t know about it, and we spend our tax money putting people in prison. I couldn’t continue my undergrad years with a clean conscience without doing anything about it.”

SAMI is the result of this drive to promote awareness. Ho even plans to issue a divestment bill campaign during winter quarter to be passed by the A.S. Council. Such a bill would work as a filter to prevent council from investing in any companies that use prison labor, thereby fighting against the PIC. UC Berkeley and UC Santa Barbara have already passed similar bills. Ho hopes that UCSD will be the third UC campus to follow suit.

Ho plans to continue to raise awareness about the injustices of the prison system throughout the school year and even after she graduates, as she says that SAMI’s fight is her own personal fight. In fact, her passion for the cause was what led to her shift from a physiology and neuroscience major to an ethnic studies and sociology double major during her sophomore year.

“People are supportive of [my cause],” Ho said. “They know that I know the direction I’m going towards and that I’m not doing this haphazardly. My shift [in majors] served as a catalyst among friends to engage in this issue.”