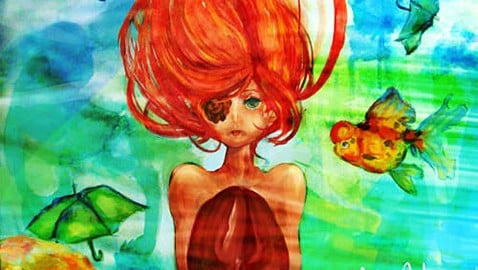 UCSD student Lily Wang, featured artist of the month at The Loft, talks about her paintings and the significance behind them

Muir College freshman Lily Wang has been an artist since she could pick up a pencil. Literally. As a child, when learning how to write the alphabet, even her letters would look like pictures.

Eighteen years later, the pen is still at work. The fruits of her labor hang in The Loft until December: 10 vibrant paintings that appear to be so professional that students have even emailed Wang asking if she sells books of her work. This makes sense considering her work is also featured in Cannon Tunnel in the Capitol Building in Washington D.C., the prize for winning the 26th Congressional District Art Contest.

The 10 pieces on display include a mix of digital and traditional pieces that she made during high school. There is visible diversity in her works, ranging from somber and intense drawings to blindingly fluorescent ones.

Wang’s goal for her art is simple.

“When people see my work, I want them to feel something or get some sort of idea from seeing my work,” Wang said. “I want to communicate feelings between me and the viewer.”

“Each piece, when I look back at [a painting], I remember what I was feeling at the time,” Wang said. “It’s kind of like looking at photos from the past. [I’d think], ‘That’s how I looked then. That’s how I drew then. Oh, I looked so gross back then, or oh, I was having fun.’”

Wang’s personal favorite on display is “Pour Love,” a digital self-portrait. Rosy, milky love showers from a dark indigo sky onto a purplish Wang, who covers her face in her hands as delicate little wispy hearts fall on her head and shoulders.
“I drew it at a time when I was feeling down — boy troubles,” Wang said. “It turned out nice. Usually, when I feel strong emotions, the pieces turn out better.”

On the other hand, Wang presents a happier and carefree side to life in her paintings as well. Though Wang describes her own work as realist in relation to anime art, aspects of the surreal and a great deal of distortion often come up in her drawings.

One such example is “Fishy Happenings,” a digital piece in which a slim girl walks down a path. On one side is a bustling metropolis, and on the other is a sky full of clouds with exotic fish flying. Two Pokemon characters are also hidden in the drawing for fun.

Though she is a freshman who has only been on campus for nine weeks, Wang got her paintings to be the only student works featured in The Loft by Googling and reaching out to find opportunities to showcase art at UCSD.

After coming in contact with UCSD Art Exhibit Coordinator Shanise Mok, Wang was able to put her art out in public for her first time at UCSD.

Though Wang has received high-profile recognition for her work, her inspirations come from a humble source: the Internet. As of now, Wang draws from the styles of deviantart user ProdigyBombay and Tumblr user 70% EtOH.
70% EtOH, a freelancer who also holds a Ph.D in pathology, has especially inspired Wang to look into the intersection of science and art. Wang is taking baby steps toward a life of science and art, drawing pictures of muscular and skeletal anatomy off of reference photos for her own practice.

However, with the overwhelming experience of being in college for the first time, art has taken a backseat for Wang as she adjusts to school and mostly consists of doodling to make sure that her drawing skills remain up to par.

“Art is something where I can destress and let my emotions flow through,” Wang said. “Some people use meditation. For me, it’s drawing — just sort of releasing stress and releasing the drawing.”

In terms of finding a community of artists at UCSD, Wang has reached out to another artist at UCSD: Warren College freshman Su Cheong. Together, they do art trades and support each other when they are going through “art bloc,” the bane of an artist’s existence.

Wang hopes to use her art to serve the community at UCSD, along the lines of art therapy and volunteering at a hospital.
Wang also wants to continue to teachdrawing at local homeless women’s shelters.

These are big goals for the busy general biology major who’s always intent on improving her technique. But Wang considers her exhibition at The Loft as a solid start.

“I feel like, ‘Wow, my work is actually hanging on a wall,’” Wang said. “It’s a bit of a surprise when I walk in, and it’s like, ‘That work is by me.’ I’m pretty happy I’ve gotten an opportunity to display my work, and I think I’m off to a good start.”