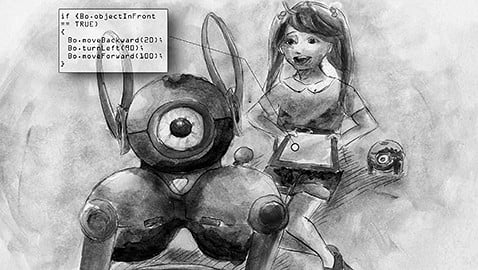 Although most toddlers are still learning how to sing the alphabet and tie their shoes, by summer 2014, some kids may be learning how to code. Former designers and programmers from Amazon, Apple, Google and Symantec founded Play-i, the company that has created kid-friendly robots, Bo and Yana, to teach kids as young as 5 basic programming. While some may be skeptical as to whether or not these robots can actually teach kids the intricacies of something as complex as coding, Play-i is taking steps in the right direction.

Toys such as these will be effective in cultivating the next generation of programmers, but progress needs to be made on other fronts as well. Though the Bureau of Labor Statistics predicts that there will be 4.6 million jobs in computing in technology by 2020, big technology companies will still have trouble finding American talent to fill them, if our education system continues to neglect offering computer science in its curriculum.

As society becomes more reliant on technology to run our governments, businesses and everyday functions, the demand for training qualified computer scientists also significantly increases. By slowly implementing code into K–12 curriculum and encouraging young individuals to take advantage of organizations that actually teach students how to code, students will be better prepared to take on computer science as a major in college and in future careers.

The perks of job security, unique benefits and lucrative starting salaries have caught the eyes of many students, but the preparation for a career in computer science is not that easy. In March 2013, Code.org released a viral online video featuring a diverse mix of technology giants, politicians and celebrities with the message that “anyone can learn how to code” with the right tools and mindset. These famous figures urged viewers to code, talked about their early experiences coding and emphasized that programming could be done by anyone who could put their mind to it. While the video campaign gave alternative perspectives to what many have deemed as an impossible field of study meant for a select few intellectuals, the non-profit’s message that students need to have the opportunity to learn code before college continues to be overlooked.

As the United States looks to improve the standard of education nationwide, the need for options to complete both introductory and advanced coursework in technology and computers must also improve with it. According to the College Board examination service, Advanced Placement Computer Science comprised less than 1 percent of the 2011 AP exams taken in California. While AP Computer Science exams remain a low approximate 24,000, other AP subjects like calculus and biology easily exceed 150,000 test takers nationwide. Though more students are taking AP exams on a national level, the number of computer science exams has remained relatively consistent for more than a decade. If the United States is looking for better programmers, society and the government will need to invest in these students’ education by giving them the tools to learn basic code and programming languages.

Society is dependent on excellent computer scientists but unfairly gives budding students a short amount of time to develop their skills. Campaigns that wish to simply increase interest in coding are not enough; showing kids the cool break rooms and benefits at Google headquarters won’t realistically prepare and educate students about the work that entails to become a computer programmer or scientist.

A society so focused on new, innovative technologies needs to recognize that students also need more early opportunities to learn. Though Bo and Yana’s impact may be small, Play-i’s mission is headed in the right direction by giving kids the opportunity to learn and expose themselves to the world of computer science.

12 thoughts on “Toddlers and Technology”