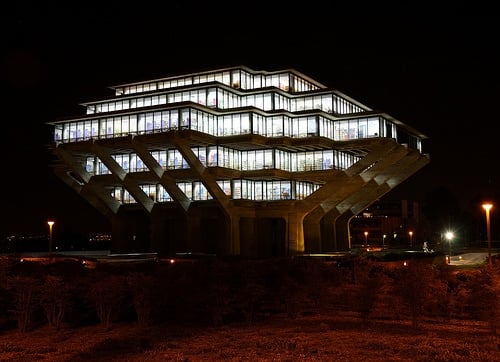 As a leading institution in biotech studies and research, it’s no surprise that UCSD is also a trailblazer in the field of energy. Our campus is home to a complex microgrid system that generates nearly all of its own energy across the span of 1200 acres.

A microgrid is a centralized system that uses solar energy, wind energy, fuel cells or other sources to meet local energy needs. Its varied energy sources and localization makes such a system highly reliable. In fact, in an interview with the Rocky Mountain Institute, UCSD Director of Strategic Energy Initiatives Byron Washom said that UCSD’s microgrid remained remarkably functional during a blackout that affected Arizona, southern California and northern Mexico on Sept. 8, 2011. The system is located in the Central Utilities Plant, which is on the western edge of Revelle College across from the UCSD School of Medicine.

Washom discussed the microgrid’s energy efficiency in terms of a single, self-sustaining unit.

However, the microgrid isn’t only efficient with regard to energy. Since energy is the second-largest expense for UCSD (second only to salaries), as indicated by Washom, it’s also important for the microgrid system to be cost-effective. Saving approximately $850,000 per month in energy costs, Washom said, the system proves economically viable, as it operates at about half the price it would cost UCSD to import the same amount of energy.

In the public eye, the microgrid at UCSD is an international innovation. High-profile individuals from all over the world have come to campus to take the VIP tour, which runs about once a week. The tour, which includes a presentation on the microgrid, offers an in-depth examination of the process and internal structure of the system.

“[We’ve] had two Assistant Secretaries of the Navy come here,” Washom said. “On [Nov. 18], the Executive Committee of Arizona Public Service is flying in just to see this. Just about every public utility commissioner and California Energy commissioner has been on campus for the tour. So it’s globally recognized as being one of the flagship microgrids in the world.”

The origins of such an ever-advancing system date back to the 1960s, when the University of California designated much of the closed Marine Corps base Camp Matthews to the development of UCSD. The Central Utilities Plant was the very first building on campus and was later modified to use the excess heat produced by the plant to generate electricity.

Perhaps the most important aspect of the microgrid in regards to UCSD is its relevance to students. The system provides a vital source of energy to the thousands of students on campus and also offers interested students the educational opportunity to learn and intern at one of the most innovative facilities in the field of energy technology. But according to Washom, at the top of the list of important applications is the overarching message that UCSD is making giant strides where few others have ever even trodden.

“First and foremost, it begins to show the students that it’s the art of the possible in terms of being energy efficient, generating portions of your power from renewable resources and also energy storage,” Washom said. “Their campus is really a pioneer of the future of energy.”

Washom emphasized that the process of becoming truly efficient is interminable.

“It’s never ending,” he said. “[With regards to] the ability to continue to conserve our use of precious resources, like energy and water, there’s always room for improvement. It’s an innovation [that is] allowing us these continual improvements in our efficiency.”