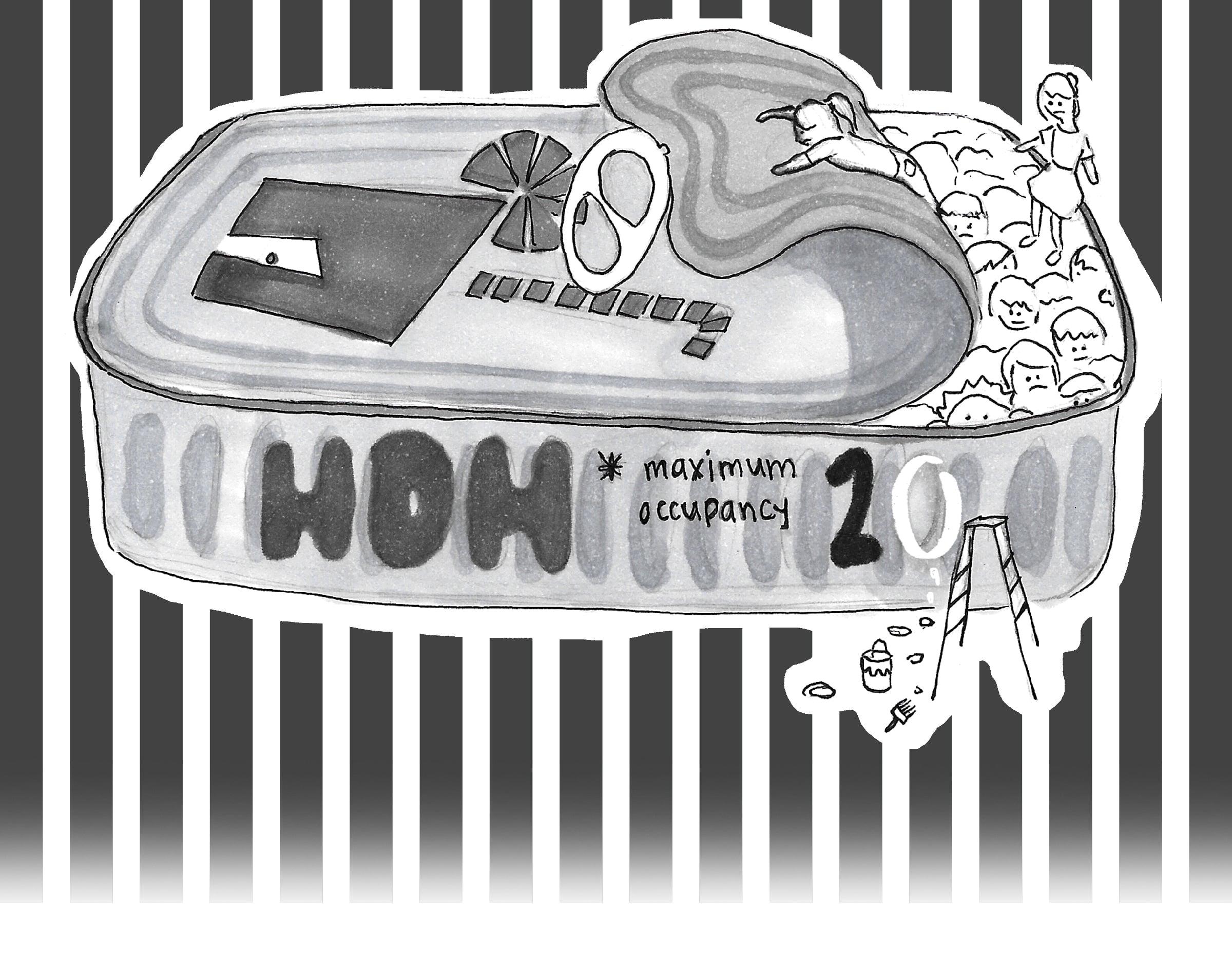 The trials and tribulations of freshman year are many. There’s the risk of gaining the dorm food-induced Freshman 15. There’s the new challenge of doing laundry — a first for many students — and finding the contents of the dryer you claimed dumped by an anonymous dorm-mate onto the floor. There’s the all-consuming effort to, as you’re supposed to in college, “find yourself.” Now imagine facing all those challenges with half the personal space.

This fall, 300 UCSD freshmen are doing exactly that. They have been placed in rooms that UCSD’s Housing, Dining, and Hospitality services is dubbing “temporary doubles”: a room for one redesigned to squeeze in two students, outfitted with a set of bunk beds, two wardrobes and two desks to be placed outside of the room in common space. The space allotments, according to a petition on Change.org, are 50 square feet per student, as opposed to the already-cramped 63.33 feet per student in triples.

It’s not like HDH hasn’t tried to fix its mistake. Following a petition, HDH lowered the price of housing for those in temporary doubles by $1,000, and they’ll be lowering it by another $1,000 for those who are still in temporary doubles next month. They’ve also removed the penalty for canceling housing contracts after the move-in period. But even though HDH has showed a marked effort to make accommodations for the affected students, the department’s housing SNAFU may hurt them in the long run. UCSD, as an increasingly lucrative school with more applicants every year, will continue to face the challenge of enrolling too many students without enough housing.

The problem lies primarily in HDH’s eagerness to provide all students with on-campus living for four years of school. In Fall Quarter 2012, HDH began to offer a four-year on-campus housing guarantee to all incoming full-time freshman and transfer students. The offer was introduced after the completion of a five-year housing construction plan that doubled the amount of available on-campus residences, but the overwhelming demand on the part of students has showed that what once seemed like plenty of space isn’t cutting it.

The U-T San Diego reported that UCSD saw an 8.1-percent increase in admissions compared to last year, and the admitted students were more highly qualified than ever before. (Last fall alone, we gained 4,573 freshman and 2,239 transfers.) But judging by the current housing crisis, increasing enrollment while promising students four years in the dorms isn’t a feasible combination — and it’s now become clear that the math just doesn’t add up.

To combat the shortage, HDH emailed students over the summer, offering an opt-out plan that would pay them $2,000 in taxable income and $1,000 in dining dollars if they gave up their housing contract. But moving out of the dorms faces a host of its own issues.

While off-campus rent prices are much cheaper than the dorms, students have no easy way to get to campus. Most nearby affordable housing is located east of the Interstate 5 — slightly more than a hop, skip and a jump from campus. These students must shuttle or drive to campus, but Transportation Services’ budget crisis has caused complications. The UCSD-run Nobel and Arriba shuttles could be canceled, and students may soon have to pay for MTS bus stickers. And the parking shortage (finding an S spot on campus is a small miracle) coupled with the high cost of a daily parking pass has made driving to campus a hassle, too.

For freshman and transfer students who prefer on-campus living, we can only imagine that the transition to dorm life has become even more traumatic. Thurgood Marshall College’s welcome letter to new students urged residents to have a positive outlook on living in closer-than-ever quarters, offering that “sometimes we think we aren’t going to like something until we try it out.” Nearly every single room in Marshall has been changed into a temporary double, and in Muir, storage rooms have been converted into temporary dorms.

Administration seems to hope that enough students will flee the dorms to make room for the students currently in temporary housing. And although enough may leave to remedy the crowding, the difficult transition to housing may prove to take an emotional toll on students as they adjust to school in an even more turbulent environment than usual.

The simple truth is that UCSD is just congested. With many services underfunded and overcrowded, it seems like the university just can’t continue to make promises it either fails to keep or keeps in condition-heavy ways. However HDH chooses to meet the housing shortage, it has to do it quickly and find a long-term solution, instead of cutting corners and making students’ transition to college far more stressful than it needs to be.