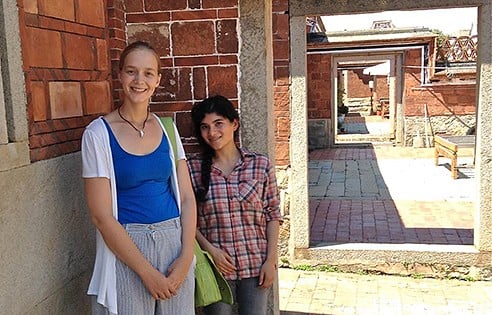 Landing a job post-graduation is enough to spawn a sigh of relief from any college student. Recent UCSD graduate Rachel Brown knows the feeling — and then some. Last April, after a six-month wait, the former Eleanor Roosevelt College student learned that she had been accepted into the Fulbright English Teaching Assistant Program. This sent her to Kinmen, Taiwan at the start of August to begin her 11-month term at Shyan An Primary School.

Brown is one of 12 recent graduates from UCSD who received a grant this year from the Fulbright U.S. Student Program — a platform that gives individuals the opportunity to pursue academic study, research projects or English Teaching Assistantships abroad. This is the greatest number of grant recipients selected from UCSD on record. Fulbright is the nation’s largest exchange program of its kind, operating in over 140 countries and awarding  roughly 1,900 grants each year .

In addition to Taiwan, Fulbright grantees from UCSD have been flown out to work at multiple sites this academic year, including Russia, Austria, Vietnam and Chile.

“When I found out I got the grant, I couldn’t stop smiling for at least 10 minutes,” Brown said.

Brown is currently a mile off the coast of China, on Taiwan’s outlying island of Kinmen, working with children in third through sixth grade — reading books, reviewing vocabulary words and playing games in the classroom.

“My classes are mostly supplemental English practice so [that] the students can have exposure to an all-English atmosphere with a native speaker,” Brown said.

Brown credits Fulbright and the Kinmen government’s commitment to English education for making it possible for her to pursue her goal of helping children.

But her pursuit didn’t begin with her venture to Taiwan; Brown took a quarter off from school in 2011 to spend three months volunteering as an English tutor at Gashora Girls Academy of Science and Technology in Rwanda.

“I enjoyed that so much that I thought teaching abroad again might prove an equally positive experience,” Brown said.

It’s been just shy of two months since leaving her hometown of Menlo Park to make her debut in Asia, but already, Brown feels that she had been right about her hunch.

“I’ve only just started, but so far, I really like it when I can see a little spark in my students,” Brown said. “Whenever they listen to my instructions, understand what I want and scoot forward in their seats, pencils poised, I feel like I’m succeeding.”

While she’s experienced success in teaching her own language, Brown admitted that learning the native speech is still a work in progress. She estimated her level of fluency in Mandarin to be equivalent to that of her third graders’ English.

“I know tones, although I can’t always hear them, and I can say, ‘Thank you,’ ‘Excuse me’ and ‘I want a passion fruit tea, large size’ — but that’s about it,” Brown said. “I hope to learn more Chinese soon, but I have to focus on teaching first. That’s my main priority.”

Effective communication with the locals may be a skill that Brown is far from mastering, but the language barrier hasn’t stopped her from learning about the native culture and its people — both in and out of the classroom.

“I’ve learned that Taiwanese garbage trucks play ice-cream-truck-style music and that people are surprised I can use chopsticks. [I’ve learned] that being over 5’10” is extremely fascinating, that teaching is 20 percent knowing the material, 40 percent knowing your class and 40 percent faking it until something works,” Brown said. “[I’ve learned] that Chinese words are extremely difficult to pronounce correctly [and] that children have personalities that extend way past language barriers.”

When she’s not teaching, Brown takes time to explore her new home. To make getting around the small island easier, she rented a scooter after getting her Taiwanese scooter license earlier this month.

“I wander around my town when looking for a place to eat dinner and point at foods I don’t know on menus to order sometimes,” Brown said. “You just adapt. It’s that, or give up, and I’ve never been the giving up type.”

Brown believes that it will take her a bit longer before she feels completely at home in Taiwan.

“I think it takes three months to love a country — one to explore and be excited, one to be disappointed that it isn’t home and one to accept that this place is growing on you and it might even be your new home,” she said. “The boundaries on when you switch between these emotions are pretty fluid, but at the moment, I am definitely happy. I think once I learn more Chinese, this will feel like a new home.”

Brown still has many more months to make herself comfortable in Taiwan before she returns to the states next July.

“I’m looking forward to getting to know my students really well and also to traveling more,” Brown said. “I want to see the rest of the country when possible.”