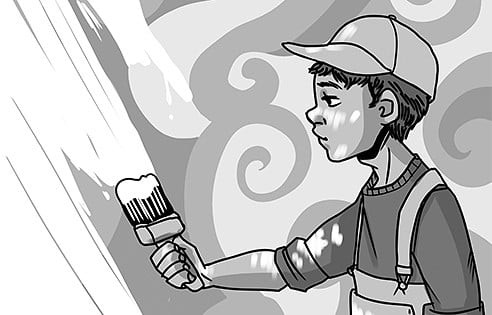 Welcome home, Tritons. To many of you who were away for the entire summer, UCSD may seem unchanged, looking exactly how it did when you packed up your bags three months ago. Other than the new traffic lights and renovated Blake Hall, most of campus appears exactly the same. The Triton statue still floats in front of Price Center and Sun God is still random and rainbow. But bad news will hit when you and your friends decide to enter the Mandeville Center staircase to find that Graffiti Hall is gone, with no sure signs of return.

For decades until early September 2013, Graffiti Hall was a landmark attraction here at UCSD. It was a place for freshmen to explore in their first few days on campus and to show to visiting high school friends. Year after year, campus tour guides would take excited prospective Tritons to see spray paint-covered walls full of years of art and words that represented countless students’ personal expression. A trip there today would disappoint these same students: They would find a dull, sterile basement full of walls that are entirely whitewashed, posted with dispiriting signs marked “vandalism is prohibited” along with brand-new surveillance cameras.

We’re more than disappointed. In losing Graffiti Hall, we have lost an important outlet for students, removed a campus symbol, and broken a long-standing UCSD tradition: that of embracing and encouraging many different art forms. We hope that the administration and A.S. Council will come together to acknowledge this sentiment and remedy students’ loss.

Graffiti on any university-owned facility is and has always been against UCSD’s Student Conduct Code, but the rule was previously blurry, and it was seemingly not in effect with regard to Graffiti Hall with administrators seeminly turning a blind eye, until now. The fact that Graffiti Hall was established decades ago — and the contained nature of its graffiti — left many unaware that contributing was really considered illegal tagging at all. For years, the lax enforcement led students to believe they were doing nothing wrong.

The sudden enforcement of the Student Conduct Code and UCSD policy in accordance with Graffiti Hall was random and seemingly out of the blue, especially after so many years of students using the space unpunished. Before the warning signs were posted and the security cameras were installed, an anonymous student posted on Reddit that police had ticketed them for the possession of spray-paint cans while the student was leaving Mandeville Center, but had let them off relatively easy because tagging rules had never before applied to Graffiti Hall. According to this source, the officer said that “the Chancellor decided to pass a verdict that tagging in Graffiti Hall will now be penalized,” suddenly enforcing a rule toward which UCSD had previously left unenforced.

Graffiti Hall was once an outlet for student art and self-expression; a place on campus that was truly unique. It was a place that students enjoyed, whether they were contributors or spectators. We’ve had Graffiti Hall three decades too long for it to be seen as anything less than a campus icon — it’s among the ranks of the Sun God Statue or the Fallen Star house above the Jacobs School of Engineering. It was an important piece of UCSD’s history and tradition, a place that proud UCSD students would take photographs of, walk through, and an attraction they would even show to visiting friends and family.

Students enjoyed Graffiti Hall for the many things it represented to each of them. Its removal has led to countless Facebook posts, UCSD Confessions and Reddit threads of unhappy students and alumni. Many feel disappointed and upset about losing one of their favorite places on campus, right from under their noses.

At the end of the day, the loss of Graffiti Hall leaves many students robbed of an important part of campus, a place where they could express themselves and share their art with their peers. The graffiti conveyed an enormous amount of history, quotes, art, culture, and inspiration that gave students a sense of community. Graffiti Hall was not a staircase basement solely comprised of scrawled profanities, questionable phone numbers and arbitrary markings. It was a manifestation of diverse student art and this free expression space meant a lot to our students.

Not a single student is happy to see Graffiti Hall go, but anonymous confessions and Facebook posts won’t be enough to bring it back. Students should keep moving forward to fight a creative space. If students act to vocalize their dissatisfaction with the removal of Graffiti Hall to administrators and A.S. Council representatives, there’s a chance that we’ll see something happen. We hope that administrators will see the effcts of removing an icon like Graffiti Hall and can make negotiations regarding the space loved by students and visitors.