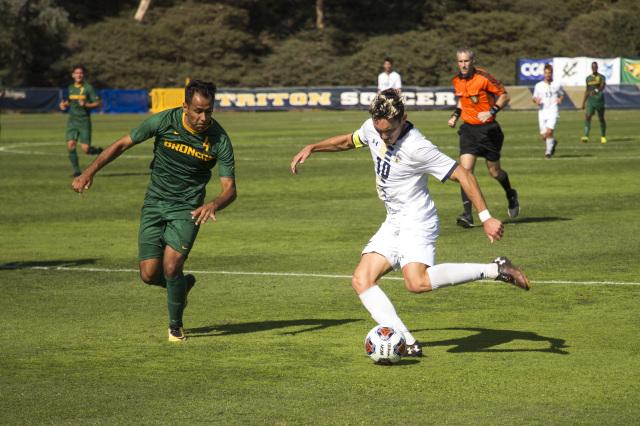 It did not take long for the Broncos to get on the scoreboard. Within the first three minutes, Cal Poly Pomona found the back of the net, putting the Tritons in an early 1–0 deficit. Though there were over 80 minutes left in regulation, UCSD was never able to climb out of that hole.

In a post-game press conference, UCSD head coach Jon Pascale gave a lot of credit to Cal Poly Pomona for an impressive performance. “It was two good teams going head-to-head and I give credit to Pomona. They are a very good group and had some really good moments in the game, especially in the first half.”

Though he was disappointed with the loss, Pascale was proud of the resilience his team showed. “Obviously, I’m not thrilled with the result, but I am happy with the response our team had throughout the game and the effort [they] put in. I thought through large stretches we were on them, at them, and had them penned in a little bit, and against that team that’s not easy to do.”

The tournament got off to a promising start for UCSD with a 4–2 victory against its first-round opponent the San Francisco State University Gators. The Tritons and Gators exchanged goals early in the game, leading to a 2–2 tie with a little over 70 minutes left to play. Junior forward Brett Jones got off to a hot start, providing the Tritons with their first two points to keep the game tight. The teams stayed deadlocked until in the 61st minute, junior forward Jonathan Sabouri found the back of the net off a pass by freshman midfielder Cooper Lachenbruch to put the Tritons on top, 3–2. Lachenbruch would follow up his key assist with an unassisted score of his own in the 67th minute. With that, UCSD was able to hold off SFSU to take the game 4–2 and advance to the next round of the tournament.

With their elimination from the tournament, the 2019 UCSD men’s soccer team’s season comes to a close. The Tritons end with a 15–4 overall record with 8–3 in conference play.