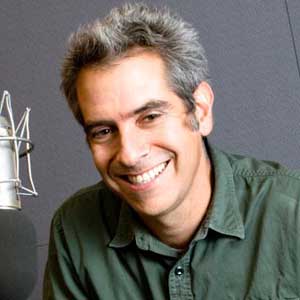 UCSD welcomes a new professor to the Communication Department, an individual who emphasizes the importance of versatility and resilience in journalism amidst improvements in technology.

Marco Werman remembers a time when he had to cut reels worth of tape with a razor blade in order to edit audio. With over 20 years of journalism experience under his belt, he has had to adapt to emerging technology and bounce between storytelling platforms, a skill that he deems crucial for any aspiring journalist.

Werman has spent almost every weekday for the past nine years hosting public radio’s global news show “The World,” which covers everything from breaking news to unique features. The seasoned journalist joined the UC San Diego department of communication over the summer as the university’s very first journalist-in-residence.

Having lived on the east coast since the mid-‘90s, Werman and his wife decided that they wanted to live somewhere warmer. After weighing their options, and considering locations such as France and Costa Rica, the couple ultimately settled on Southern California. Werman started thinking of how to bring a more dynamic sense of collaboration to “The World” in California. Having broadcasted the show alone from his home throughout the pandemic, Werman was ready for some change. When he was connected to Communication Department Chair Brian Goldfarb, everything fell into place.

In addition to broadcasting “The World” from campus daily, Werman plans to foster a collaborative environment between students, faculty, and his team during his time with the department.

“I really hope that it’s kind of like [a] two way street,” Werman said. “So as much as students might be able to learn from me … I’m also really hoping that I and the show can learn from students and from faculty. It’s about growing and kind of critiquing the show and making it better and stronger.”

Werman plans to visit two communication classrooms this quarter, Professor Kidman’s COMM 134 class on media audiences to discuss audience metrics, and Professor Hallin’s COMM 109N class on American News Media to discuss what goes into producing an episode. Professor Hallin’s class will be listening to an episode of “The World,” and a few days later, Werman and his producer plan on visiting the class and explaining the production process.

“There is a kind of sense with listeners that this is all happening live,” Werman said. “People say ‘How many guests do you have in your studio in an hour?’ and it’s like, well, actually a lot of those interviews are pre-produced and then I do the continuity mostly live but everything’s kind of edited very tightly. So we’ll be explaining that and answering questions.”

Werman’s passions lay with photography at the start of his career, and he initially wanted to become a photojournalist. While he ultimately ended up taking the broadcast journalism route, to this day Werman said that he enjoys bringing his camera with him while on assignment for “The World.”

A journalist since he was 16, Werman understands the importance of versatility in the field; in fact, he thinks that journalists are a lot like “Jeopardy” pros. Just as a vast array of knowledge aids Jeopardy players in covering every category, Werman believes that a similar sense of adaptability helps journalists in broadening their scope.

Over the course of his career, he has constantly had to adapt to new mediums and environments. Following three years in the Peace Corps in Togo, Werman worked as a freelancer for the Associated Press in West Africa for a while, struggling to make ends meet. When the opportunity arose for him to take over the Africa beat for the BBC World Service, he embraced it.

After two years doing straight dispatches for the BBC from Ouagadougou, he took on a position at the BBC headquarters in London and spent a year producing a morning show about Africa. From there, he returned to the U.S. to help start a brand new radio station in upstate New York. Werman spent years building the station from practically nothing, and became a news director that filled two hours of radio five days a week. From news to interviews to music, Werman touched on a little bit of everything.

“I was just hooked; I just loved radio,” Werman said. “I loved what you were able to do, I loved that as a writer, it involved writing but it also involved kind of writing into the sound.”

When he got a call from a former colleague at the BBC regarding a new program called “The World,” he was ecstatic. Werman has been with the show since it started in 1995, and has had the opportunity to travel around the world, from Brazil to Japan, over the years. Such experiences have shaped his approach to journalism, causing him to better appreciate his years in Ouagadougou and reject the concept of parachute journalism — during which reporters will spend short periods of time in a place on assignment.

“I really encourage younger journalists to kind of really get to know a place, spend some time living in a place, maybe writing about it, maybe doing journalism, while you’re there,” Werman said. “I really think it’s so important to spend time really immersing yourself in a place and understanding the nuances of how people live there and once you get that, like if you live in a developing country for like two years, there’s a lot you can kind of apply to other developing countries.”

Breaking out of that America-centric bubble that easily ensnares people is something that “The World” tries to actively combat. Werman and his team aim to shed light on issues and triumphs around the globe that haven’t received much, if any, global coverage. They try to strike the perfect balance between hard news, the top stories of the day, and more optimistic stories that leave listeners feeling hopeful.

“Remember that you’re kind of educators as well, and there’s a huge responsibility on that,” Werman said. “But also that education … remember that it can help change the world.”

Now that he plans on broadcasting from campus daily, Werman is excited to continue sharing his expertise with the community, and hopefully foster a new wave of broadcast journalism on campus.

Photo Courtesy of The World

2 thoughts on “Tune in: UCSD’s first journalist-in-residence is making waves”